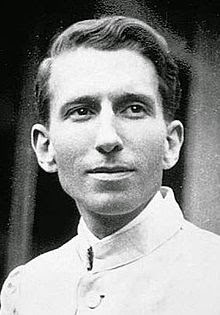 I am indebted to Mario Malacrida from Italy for bringing the Italian poet Guido Gozzano to my attention.   Although Gozzano did not take part in the First World War due to ill health, I have included him in my commemorative  exhibition project in order to illustrate the global nature of the conflict.  Many people in the UK seem to have forgotten the fierce fighting that took place in Italy during the First World War and yet many British men and women served and died during that Campaign and lie in Italian cemeteries.  Female First World War poet Vera Brittain’s brother, Edward Brittain MC, is among those who were killed during the Italian Campaign;  Edward is buried in Italy on the Asiago Plateau.   After her death, at her wish, Vera's ashes were scattered upon her brother’s grave.
In 1915, Italy joined the conflict on the side of the Allies, which is the name by which the three Entente Powers (Britain, France and Russia) became known as other countries joined them during the First World War.
Guido Gozzano was born in Turin on 19th December 1883, the son of Fausto Gozzano, who was an engineer, and his wife Diodata Mautino, who was the daughter of an Italian Senator. Though his health was never good, Gozzano was a keen sportsman, enjoying ice-skating, cycling and swimming.  He studied law at the University of Turin, however, he preferred attending courses on literature given by the poet Arturo Graf to the lectures on law.  Graf was an Italian poet of German origin and he greatly influenced Gozzano, encouraging him to write.
In 1907 Gozzano’s health deteriorated and he went to live on the Italian Riviera.  The same year, he began a love affair with the poet Amalia Guglielminetti.  Their love letters (1907 – 1909) were published in 1951. Gozzano’s first collection of poems “La via del rifugio” was published by the Turin publishing company Streglio.
In 1909, Gozzano gave up the study of law to dedicate himself to writing.  From February 1912 until May 1913 he travelled by boat on a cruise to India and Ceylon in an attempt to improve his health.   Gozzano composed several poems about the First World War which were, however, not a success with those who knew and loved his romantic poems.
Gozzano also wrote short stories and worked on adapting some of those for use in theatrical and film productions.
Gozzano was working on a film script about St. Francis of Assisi when he died on 9th August 1916 .
Observations on the poem “Signorina Felicita” by Mario Malacrida:
Gozzano describes a portrait of a woman in the following way:
Intorno a quella che rideva illusa nel ricco peplo, e che morí di fame, v’era una stirpe logoro e confusa: topaie, materasst, vasellame, lucerne, ceste, mobili: ciarpame  reietto, cosí caro alia mia Musa!
About her, smiling in her Grecian dress and Grecian dream, who came to die of hunger, there lay a tattered and promiscuous race: some furniture, some oil lamps, the odd hamper, mattresses, rats’ nests, crockery: the lumber that since it is rejected charms my Muse!
The poem from which this stanza is taken, “Signorina Felicita,” is one of the best known in the Italian language, and it shows Gozzano at his most accomplished.
The English poem that comes closest to this poem’s artistry is probably George Meredith’s “Modern Love” (1853), which describes in novelistic detail a troubled love affair. Gozzano’s poem tells the story of the poet’s love for a woman of the working class. It contains passages of condensed and elliptical dialogue and lively novelistic descriptions like the one just quoted. But what Italians like best about this long poem is its mood of refined sentimentality, its bittersweet recognition of the impossibility of recapturing a vanished past. This mood is asserted from the very opening lines of “Signorina Felicita,” which Italians can recall almost as readily as they can “nel mezzo del cammin’ di nostra vita,” the words that begin The Divine Comedy:
Signorina Felicita, a quest’ ora scende la sera nel giardino antico della tua casa. Nel mio cuore amico scende il ricordo. E ti rivedo ancora, e Ivrea rivedo e la cerulea Dora e quel dolce paese che non dico.
Signorina Felicita, this hour finds evening falling on your ancient home and ancient garden. And the memories come upon me thick and fast. I see once more you and Ivrea and the skyblue Dora, all that dear region which I do not name.
Sources:  Wikipedia and Mario Malacrida
Posted by Lucy at 09:51