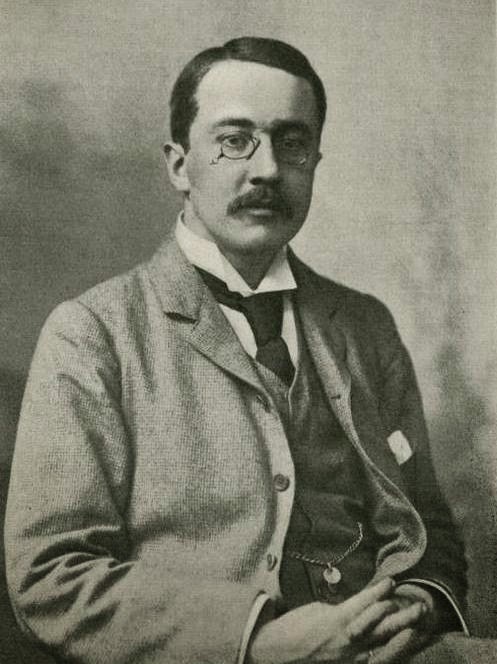 Best known for the Raffles stories, Ernest William Hornung was born on 7th June 1866 in Middlesborough. Hornung was the third son and the youngest of the eight children of John Peter Hornung and his wife Harriet nee Armstrong.   His father, who changed his Christian names from Johanes Petrus to John Peter, was originally from Hungary and moved to England as a coal and iron merchant.

Hornung was educated at St. St. Ninian's School in Dumfriesshire before going on to Uppingham School, where he developed his love of cricket.  Hornung's health was never very robust so he was sent to Australia, where he worked as a tutor and on sheep farms.  He returned to England in 1886 and, as his father was having business problems, found work as a journalist and also wrote about his experiences in Australia.

Hornung's love of cricket took him to two cricket clubs where he met fellow writers Arthur Conan Doyle and Jerome K. Jerome.  By December 1892 Hornung and Conan Doyle's sister, Constance Aimée Monica Doyle were engaged to be married.  The pair married in September 1893 and had one son - Arthur Oscar - whose Godfather was his uncle Arthur Conan Doyle.  He was also a keen member of J.M. Barrie's recreational cricket team.

Hornung's most famous creation - Raffles - was apparently inspired by Conan Doyle's Holmes and Watson and based on Oscar Wilde and Lord Alfred Douglas.  The collection of short stories about the adventures of the 'gentleman thief' Raffles and his friend and partner-in-crime Bunny Manders was first published together under the title "The Amateur Cracksman" in 1899.

When WW1  broke out in 1914, young Arthur Oscar Hornung was at Cambridge.  He volunteered for war service and obtained a commission in the Essex Regiment.  He was killed at the age of 20 during the Second Battle of Ypres on 6th July 1915.  Hornung had his son's letters to his parents from the Western Front published in 1916, under the title "Trusty and Well Beloved" by Oscar Arthur Hornung.

During the First World War, Hornung joined the YMCA and did voluntary work with the organisation in England.  In 1917, following a visit to France, he volunteered to run a YMCA Hut and library at Arras near the front line.  Hornung's collection of WW1 poems "Ballad of Ensign Joy " was published later that year.

In June 1917, Hornung's poem "Wooden Crosses" was published in "The Times" newspaper, followed soon afterwards by the poem "Bond and Free".   While in France, he borrowed a car and visited his son's grave in February 1918.  After the German Spring Offensive of 1918, Hornung's hut was forced to retreat - first to Amiens and then back to England.   After the Armistice in November 1918, he went to run a YMCA hut in Cologne in Germany.

Hornung is buried in Saint-Jean-de-Luz in the south of France. Conan Doyle, who was on his way back to England after a spiritualist lecture tour in Australia, heard the news while he was in Paris and was able to attend Hornung's funeral.

Hornung's WW1 poetry collections are as follows:  "The Ballad of Ensign Joy" published by Dutton in New York in 1917;  "Wooden Crosses", published by Nisbet in 1918 and "The Young Guard", published by Constable in 1919.  Due to his love of cricket, it seems appropriate to include this poem by Hornung: 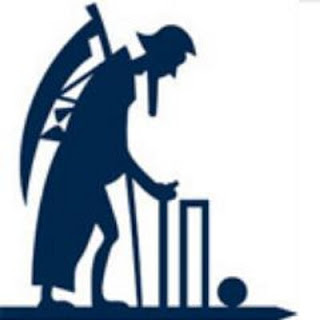 “Lord’s Leave” (1915) from "The Young Guard" For those of you who are not cricket fans, Lord's cricket ground in London, UK - known as the Home of Cricket - is owned by Marylebone Cricket Club.
NO Lord's this year: no silken lawn on which
A dignified and dainty throng meanders.
The Schools take guard upon a fierier pitch
Somewhere in Flanders.
Bigger the cricket here; yet some who tried
In vain to earn a Colour while at Eton
Have found a place upon an England side
That can't be beaten!
A demon bowler's bowling with his head—
His heart's as black as skins in Carolina!
Either he breaks, or shoots almost as dead
As Anne Regina;
While the deep-field-gun, trained upon your stumps,
From concrete grand-stand far beyond the bound'ry,
Lifts up his ugly mouth and fairly pumps
Shells from Krupp's foundry.
But like the time the game is out of joint—
No screen, and too much mud for cricket lover;
Both legs go slip, and there's sufficient point
In extra cover!
Cricket? 'Tis Sanscrit to the super-Hun -
Cheap cross between Caligula and Cassius,
To whom speech, prayer, and warfare are all one -
Equally gaseous!
Playing a game's beyond him and his hordes;
Theirs but to play the snake or wolf or vulture:
Better one sporting lesson learnt at Lord's
Than all their Kultur....
Sinks a torpedoed Phoebus from our sight;
Over the field of play see darkness stealing;
Only in this one game, against the light
There's no appealing.
Now for their flares... and now at last the stars ...
Only the stars now, in their heavenly million,
Glisten and blink for pity on our scars
From the Pavilion.

Hornung's memoirs of his time with the YMCA were published under the title "Notes of a Camp-follower on the Western Front" by Constable and Co. Ltd., London in 1919.