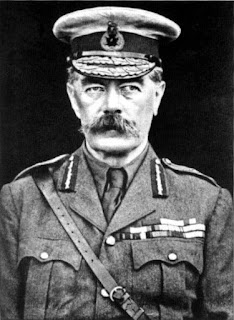 Lord Kitchener (1850 – 1916)
Horatio Herbert Kitchener was born in Ireland in 1850.  He attended the Royal Military Academy in Woolwich and volunteered to join a French field ambulance unit during the Franco-Prussian War in 1970.  He became ill after a balloon flight across a battlefield and returned to Britain for treatment.


Kitchener was commissioned into the Royal Engineers Regiment of the British Army in January 1971. He became famous after the Battle of Omdurman in the Sudan in 1898.
During the First World War, Kitchener was Secretary of State for War and was responsible for the campaign to recruit volunteers into the British Army.


On 5th Jun3 1916, Kitchener was drowned when the ship he was travelling on to Russia – HMS “Hampshire” – hit a mine and sank.


A schoolboy wrote a poem in honour of Kitchener at the time of his death and it was published in a local newspaper:


No stone is set to mark his nation’s loss,


Not e’en the tribute of a wooden cross


Can mark this hero’s rest.


He needs them not, his name untarnished stands,


Remindful of the mighty deeds he worked,


Footprints of one, upon time’s changeful sands,


Who ne’er his duty shirked.


Who follows in his steps no danger shuns,


Nor stoops to conquer by a shameful deed,


An honest and unselfish race he runs,


From fear and malice freed.


By Eric Arthur Blair (who became the writer George Orwell) Copyright © the estate of the late Sonia Brownell Orwell, by kind permission of A M Heath & Co Ltd.  First published in a local newspaper during WW1. 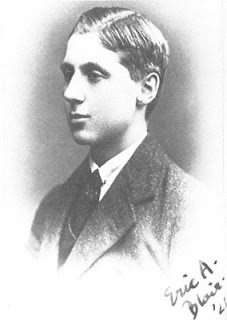 George Orwell was the pen-name of Eric Arthur Blair, who was born in India on 25th June 1903.  His parents were Richard Walmsley Blair, who worked for the Indian Civil Service, and Ida Mabel, nee Limouzin, whose father was French. Eric has two sisters – Marjorie, who was five years his senior, and Avril, who was five years his junior.  Ida returned to live in England in 1904, where the family lived in Henley-on-Thames.   Eric’s father returned to live in England in 1912 and the family moved to Shiplake, just south of Henley.


Eric began writing poetry at a young age.  He and Marjorie attended a convent school in Henley.  Eric’s uncle, Charles Limouzin suggested sending Eric to boarding school and in 1911 he attended St. Cyprian’s in Eastbourne.


Eric’s school encouraged pupils to write poetry and during the First World War two of his poems were published in the school's local newspaper the Henley and South Oxfordshire Standard.   He came second in the Harrow History Prize, a competition held annually for children at primary school.   The high standard of Eric’s school work meant that he was awarded a scholarship to Wellington School and Eton College.   In January 1917 Eric went to Wellington, transferring to Eton in the autumn of that year.  Eric’s French teacher at Eton was Aldous Huxley.  Eric was involved in the writing and publishing of a school magazine.


When he left Eton, Eric passed the entrance examination and joined the Imperial Police which became the Indian Policy Service.


After a long and interesting life, Eric died of Tuberculosis in London on 21st January 1950.


Since I first contacted them, I understand that George Orwell’s family have published his poems written during the First World War.
Posted by Lucy at 05:21