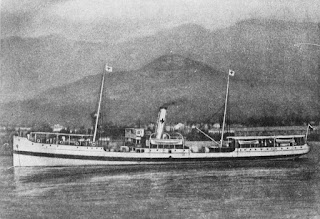 Imperial Russian Hospital Ship ”Vpered” was torpedoed and sunk in the Black Sea on 8th July 1916 by German U-Boat U-38.   She was off the Turkish Coast.

In memory of all who perished when hospital ships were sunk during the First World War, here is a poem by William H. Littlejohn.

Littlejohn, the son of William and Mary Ann Littlejohn, nee Bulled, of London, joined the Middlesex Regiment in WW1 and became a Company Sergeant Major.  In 1915, he married Florence Annabel Bell and the couple lived in Hammersmith, London.   William was killed on 10th April 1917 during the Battle of Arras on the Western Front in France. 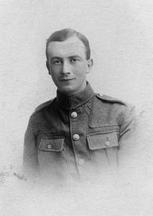 There was a green-lit hospital ship,
Green, with a blood-red cross,
Lazily swaying there in the bay,
But it went out with the light of the day -
Out where the white seas toss.
Green-lit, red-lit hospital ship,
Cold are my hands and trembling my lip:
Did you make home from the bay?


Published in "The Muse in Arms: a collection of war poems, for the most part written in the field of action, by seamen, soldiers, and flying men who are serving, or who have served, in the Great War"  published by Murray in 1917.
William H. Littlejohn also had a poem published in
"The Valiant Muse: an anthology of poems by poets killed in the World War" edited by Frederic W. Ziv and published by Putnam in 1936.
NOTE:  The First World War was not called that until after the Second World War.
Sources:  Catherine W. Reilly "English Poetry of the First World War A Bibliography" (St. Martin's Press, New York, 1978)
and various internet sites.
Posted by Lucy at 03:57