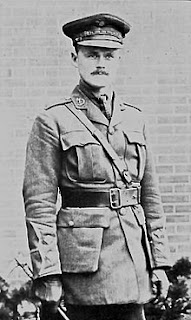 James was born in Richmond Hill, Ontario, Canada on 25th  July 1883.  His parents were Dr. James Langstaff, MD and Louisa F. Langstaff.  James studied at the University of Toronto and won 7 scholarships for further study.  He went on to study law at Osgoode Hall, Toronto and graduated in 1912 with the Gold Medal and Van Koughnet Scholarship.  James was a keen tennis player.


He joined the 75th Battalion of the Canadian Infantry in WW1 as a Lieutenant and was posted to the Western Front where he was Mentioned in Despatches and recommended for a Military Cross.   He was soon promoted and gained the rank of Major.


Major James Langstaff was killed in action on 1st March 1917 during a Canadian attack on the German Lines near Vimy Ridge and was buried in Villers Station Cemetery, Pas de Calais, France.


From “The Dead” written by James Langstaff shortly before he was killed:


"These laid the world away; poured out the red


Sweet wine of youth; gave up the years to be


Of work and joy, and that unhoped serene


That men call age; and those who would have been.


Their sons, they gave, their immortality.


Blow, bugles, blow! They brought us, for our dearth.


Holiness, lacked so long, and Love, and Pain.


Honour has come back, as a king, to earth.


And paid his subjects with a royal wage;


And Nobleness walks in our ways again;


And we have come into our heritage."


"Up in the trenches the men get fairly expert at detecting the direction of shells and are able to dodge them to some extent. This is particularly the case with some of the Trench mortar shells, "rum-jars," as they are called, which not only can be heard coming but actually be seen in the air. They have a very high trajectory and are a long time in the air relatively to the distance they have to go. On the other hand, some other shells are impossible to dodge — "whizz-bangs," for instance, which have a very low trajectory and at certain ranges out- strip the sound of the explosion, so that a man struck by one never hears the shell that hit him. It is a very interesting study, comparing the time which is taken by the sound of the shell and the shell itself to traverse various ranges. Sound travels at a constant speed of 1,100 feet per second (whereas a gun starts off with a certain muzzle velocity) and gradually overtakes the shell and eventually precedes it if the range is long enough. Thus, at certain short ranges or with very fast guns the shell beats the sound; at longer ranges the shell passes you at the same instant that you hear it "whirr"; and at still longer ranges you hear the shell before it arrives.
It takes one some time to get on to all these phenomena — I can remember I used often to be puzzled at hearing the sharp bark of our own field guns apparently from just behind my back, at the very moment the shell was heard scrunching overhead. The reason was, of course, that I happened to be at just the exact range where the sound of the shell was overtaking the shell itself."


WHAT PRAYER MEANT TO HIM  - DECEMBER 25, 1916.
I know that I have been guided in many things. Other people might refuse to admit that it was guidance, but I've been there myself, and I've lived through the experiences myself, and I'm sure. Also, since getting over here, I really believe that I have been conscious of guidance and support and wisdom in difficult places. In the raid we pulled off at Ypres, for example, I'm positive that I had special guidance. Our party was to go over at midnight, but the scout officer, who had been out for two hours trying to locate the hole our guns had blown in the German wire, had not returned and nobody knew just where the gap was. Our artillery barrage was beginning and the zero hour arrived and still the scout had not returned. I had to make a decision one way or the other and I ordered the party out to take a chance on locating the gap. It looked like a rash order, but it turned out all right for the party had gone only a few yards when they came across the scout officer returning with the information!

This may not sound very convincing, but I'm sure of it, and about other things that have happened.


Anyhow everything is all for the best, and I'm trying to make the most of the time over here and I hope that I am learning from these experiences, and picking up from day to day more patience and tact and judgment and firmness and knowledge of human nature and power to handle men, that will perhaps be useful to me in the future and make this not waste time.


*February 27, 1917. I believe more and more in prayer and I'm sure that I've got strength and wisdom through it for tasks over here.   (* Taken from his last letter).


Written by Major J. M. LangstafT during the early months of his enlistment:


The tyrant lord has drawn his sword,


And has flung the scabbard away.


He has said the word that loosed his horde


To ravage, destroy, and slay.


"Then where are those who will dare oppose


The blast of my fury's flame?"


But a salty breeze swept across the seas.

And back the clear answer came:


"We have heard the boast of your mighty host,


And slaves will we ne'er become,


Let our deeds declare what bur hearts will dare.


The Mother of Men has called for them,


The nations she reared long ago;


"In Freedom's name I make my claim,


By the tokens that freemen know.


Let the world behold, as in ages old.

That my strength can never decay.


In a cause that's right, wall ye rise and fight?


"We have heard your call, mother of all.


From the shores of your island home.


Let him die in thrall who denies that call


The lion's young, they forth have sprung


At the sound of the lion's roar.


By the far-flung ocean's shore.


With eye aflame and ruffled mane.


They greet the approaching fray.


Let the foe beware who roused that lair,


*'We have heard on the air the bugle's blare


And the roll of the muttering drum;


To the surging beat of ten thousand feet.

A SONNET ON WAR Written by Major J. M. Langstaff for the Regimental Paper shortly before his death.


Would shape my life and plan my destiny;


Though in my childhood's dreams I've seen his car

Than echoed on the plains of sounding Troy,


All mingled in a strange complex alloy.


I view the panorama in a trance


Of awe, yet coloured with a secret joy.


For I have breathed in epic and romance.


Have lived the dreams that thrilled me as a boy.


How sound the ancient saying is, forsooth!


How weak is Fancy's gloss of Fact's stern truth!

More of his poems here: https://en.wikisource.org/wiki/Page:Canadian_poems_of_the_great_war.djvu/102