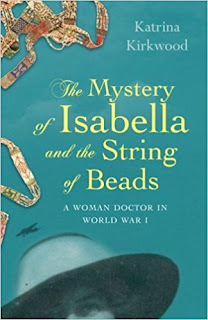 In Katrina Kirkwood's lovely book about her Grandmother who was a doctor during the First World War (see photo), I found a poem entitled “A Hospital Concert, May the 8th 1917, dedicated to a voice” (pp. 306 - 307).


The voice mentioned in the dedication was that of Salvatore Salvati, the Italian Tenor, who organised concerts for the wounded sent to hospitals in Malta during WW1.

She will wish her pure strings to be mute –


Heal us, alone, by thy voice!


Ours are the bandaged eyes,


A-search for the Singer’s face –


Pierce it with sound, for a space:

Ah! those were old words that we’ve read –


And Love’s for us lads, sick in bed,


And Love is the wounded’s last word;


And a warmth drew in from the street,


And we slipped to an English June,


And England and Italy meet,


And touch the same chord of Love’s tunes;

Then he sank to an under key –


And we fell to a blind reverie –


We were back in the fever and ache,


Or peered in a pal’s dead face,


Or were feeling the lift and the shake,


And the moan in us down to the Base;


O Singer – though sweetest - of pain!

Then he wrought us – passionate – loud –


For our slack frame stiffened them proud,


Tightening their teeth on wild breath,


While they staked for winning or death! –


Oh Singer of madness and pain!

The ward empties to shuffle and drill –


All but two bed-ridden rows;


He’s breathed all our souls to new glows;


And a pale face, still in a trance –


Is away to the glory of things;


And the crutches tap, tap to a prance;


While a voice to the hollowness clings –