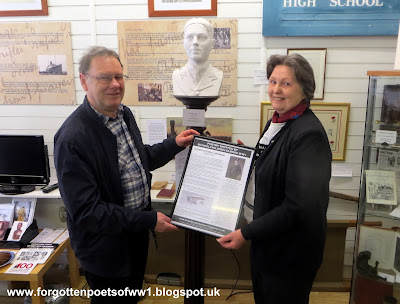 Alfred Cotterill Kermode, known as 'Cot' to friends and family, was born in 1897 on The Isle of Man, where his father, The Reverend Sidney Alfred Pizey Kermode, was an Anglican Church Minister.  Alfred’s mother was Lucy Emma Kermode, nee Lynam, and he had the following siblings:  Lucy C. b. 1890, Mary C. b. 1900 and Margaret Agnes, b. 1902.  In 1901, the family lived in Onchan, I.o.M. and in 1911 they lived in Melbourn, Cambridgeshire.


Alfred was a pupil at Oundle School when war broke out in 1914.
Alfred is just one of the poets featured in the exhibition of Poetry Written by Schoolchildren in the UK during the First World War that is on display at The Wilfred Owen Story in Argyle Street, Birkenhead, Wirral, UK.  The exhibition was opened on Saturday, 17th March 2018 (the day before Wilfred Owen's birthday) and Tim Kermode and his wife Annabel travelled up to attend a rather special event.  A bust of Wilfred Owen sculpted by Anthony Padgett was unveiled on the same day by local MP Frank Field and we presented Tim with a copy of the exhibition panel about his father Alfred. Here is a link to a BBC North West Tonight news report of the event: https://www.youtube.com/watch?v=78b40hAbqb8
The WOS is open from Tuesdays to Fridays from 12 noon until 2 pm (winter opening times) but it is advisable to phone first as the museum is manned by volunteers - 07903 337995.  Entry to the WOS is free.
The Wilfred Owen Story,
34 Argyle Street,
Birkenhead, Wirral, UK,
CH41 6AE
http://www.wilfredowenstory.com/
Panels from previous exhibitions held at the WOS, including that featuring some of the poets involved in the Battles of Messines (Mesen), Passchendaele and after in 1917, Poets of the Battle of Arras in 1917, Poets of the Somme 1916, Female Poets of the First World War, Inspirational Women of World War One and Fascinating Facts of the Great War, are available to view on file at The Wilfred Owen Story.  Other exhibitions are planned.
Photo:  Lucy presenting Tim Kermode with a copy of the exhibition panel about Oundle School that features his father, Alfred 'Cot' Kermode with the Wilfred Owen bust in the background - photo taken by Paul Breeze of www.poshupnorth.com
Posted by Lucy at 06:14