"Old Loot" - WW1 poet - does anyone know the identity of this poet? 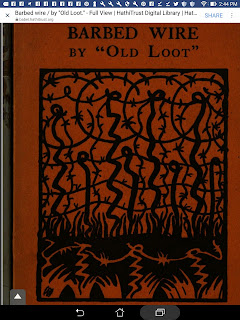 I received an interesting query recently from one of my contacts:

"... many years ago I bought a lovely copy of “Barbed Wire”, an admittedly dull First World War 56pp booklet of prose and verse (published in 1918 by Beaumont) and bound in vellum on handmade paper, which is remarkable for at least one thing - the cover has a Paul Nash woodblock design.


It is exasperating that although one surmises the author was an officer and a banker so far his identity is a mystery to me because he only used the pen name “Old Loot”. There is no clue within the text and nothing I’ve come across on-line enlightens me either so if you happen to know I’d be grateful to find out. "
I posted the query on the Facebook Page of the War Poets Association and Catherine Avak very kindly found me a picture of the cover and some of the 8 poems featured in the end of  the book, which is available as a download from The Hathi Trust. 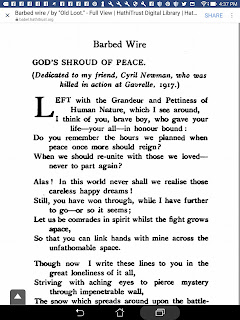 This poem (see right) was dedicated to Cyril Arnell Newman who enlisted with the Queen's Westminster Rifles in 1914.  He was posted to the Western Front in February 1915, wounded and sent home.   He was then commissioned into the North Staffordshire Regiment and returned to the Western Front in time to take part in the Somme Offensive of July 1916.  Lieutenant Newman was killed on 28th April 1917 at the age of 24 during the Battle of Arras.  He was buried in Aubigny Communal Cemetery, France.

Has anyone any idea of the identity of the poet who used the pen-name 'Old Loot'?