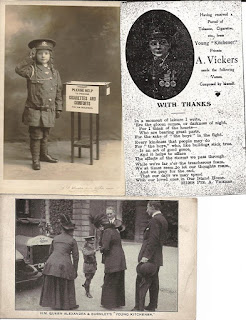 While I was researching a WW1 poet yesterday, I came across a reference to some poems about a young girl from Burnley, Lancashire. Her name was Jennie Jackson and she was known as "Young Kitchener" for the work she did during the First World War, collecting money to fund parcels for the fighting men.

Thomas Napoleon Smith remains a mystery for I can find nothing out about him, other than the titles of some of his poems, which are listed on pages 297 and 298 of Catherine W. Reilly's wonderful work "English Poetry of the First World War:  A Bibliography" (St. Martin's Press, New York, 1978).  He also had a poem published in Charles Frederick Forshaw's WW1 Anthology "Poems in memory of the late Field-Marshall Lord Kitchener, KG" (Institute of British Poetry, Bradford, 1916).

According to Catherine Reilly, Thomas's son, Corporal Ewart G. Smith of the 2nd Infantry Brigade, Canadian Expeditionary Force, was killed in a trench on 27th September 1916.   The poems seem to have been published as postcards or broadsides.  One - "Their eyes off me: or, those khaki chaps from 'crss the sea: verses by Tonoso - was first published in "The Weekly Scotsman".

If anyone knows more about Tonosa - Thomas Napoleon Smith - please get in touch.