As most of you will know, I began seriously to research the poets and poetry of the First World War in May 2012.  After a while, I became convinced that I was ‘receiving help’ because ideas, words, names and phrases come into my head from nowhere.   I often dream about the poets.  Two nights ago I awoke in the middle of the night with “Christmas 1915” going through my head.  The words remained in the cold light of day, so I began to look into poems written on or about Christmas 1915.   I am trying to find out more about the poets but if anyone can help please get in touch.

To set the scene, here is some film footage of Christmas scenes on the Western Front http://ww1lit.nsms.ox.ac.uk/ww1lit/db/object/ww1/5505 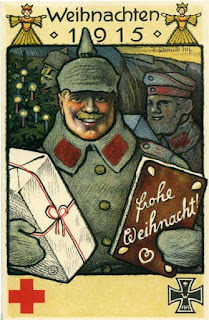 Now is the midnight of the nations: dark
Even as death, beside her blood-dark seas,
Earth, like a mother in birth agonies,
Screams in her travail, and the planets hark
Her million-throated terror. Naked, stark,
Her torso writhes enormous, and her knees
Shudder against the shadowed Pleiades
Wrenching the night’s imponderable arc.

Christ! What shall be delivered to the morn
Out of these pangs, if ever indeed another
Morn shall succeed this night, or this vast mother
Survive to know the blood-spent offspring, torn
From her racked flesh?— What splendour from the smother?
What new-wing’d world, or mangled god still-born?

On the Western Front the guns all died away
And lying in the mud on bags of sand
We heard a German sing from no man's land
He had a tenor voice so pure and true
The words were strange, but every note we knew
Soaring o’er the living, dead and damned
The German sang of peace from no man's land

They left their trenches and we left ours
Beneath tin hats the smiles bloomed like wild flowers
With photos, cigarettes and pots of wine
We built a soldier's truce on the front line
Their singer was a lad of 21
We begged another song before the dawn
And sitting in the mud and blood and fear
He sang again the song all longed to hear

Silent night, no cannons’ roar
A king is born of peace for evermore
All's calm, all's bright
All brothers hand in hand
In 19 and 15 in no man's land

And in the morning all the guns boomed in the rain
And we killed them and they killed us again
At night they charged; we fought them hand to hand
And I killed the boy that sang in no man's land

Silent night, no cannons’ roar
A king is born of peace for evermore
All's calm, all's bright
All brothers hand in hand
And that young soldier sings
And the song of peace still rings
Though the captains and all the kings
Built no man's land
Sleep in heavenly peace

With eager heart and eager hand,
We stitched and stitched, with tightening thread,
Bags, to be later filled with sand,
To shield a gallant Tommy’s head.

Hark! from the trenches rings the cry –
“Oh! help us in our deadly strife;
Provide us bags, or else we die,
For, lack of these costs many a life.”

But now from War Officialdom
Issues the order – “Cease your task.”
It fell upon us like a bomb,
And what to do, we humbly ask?

For still there floats the same refrain,
We can but feel its plaintive touch,
“Send all you can,” and then again,
Send more: we cannot have too much.”

Christmas Eve, and twelve of the clock.
"Now hey are all on their knees,"
An elder said as we sat in a flock
By the embers in hearthside ease.

We pictured the meek mild creatures where
They dwelt in their strawy pen.
Nor did it occur to one of us there
To doubt they were kneeling then.

"In the lonely barton by yonder comb
Our childhood used to know,"
I should go with him in the gloom,
Hoping it might be so.