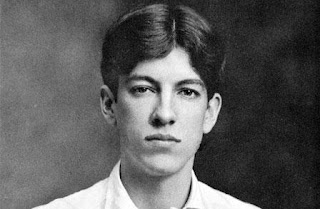 Sometimes referred to as ‘The American Rupert Brooke’, Alan Seeger was born in New York on 22nd June 1888. His family moved to Staten Island when he was a year old. Alan’s brother Charles was singer/songwriter/poet Pete Seeger’s father.

Alan attended Hackley School in New York before going on to Harvard, where he edited and
wrote for the magazine ‘Harvard Monthly’.  In 1910 following his graduation, Alan went to live in Greenwich Village to write poetry. He then went to live in Paris in France, settling in the Latin Quarter, where the artists were based.

Alan volunteered to join the French Foreign Legion on 24th August 1914 and was killed in action at Belloy-en-Santerre on the Somme on 4th July 1916. His most famous poem ‘I have a rendezvous with death’ seemed to predict his death in combat.  Alan is buried in the French National Cemetery at Lihons and was posthumously awarded the Croix de Guerre and the Medaille Militaire
by the French government.

In 1923 French president Raymond Poincaré dedicated a special memorial commemorating American volunteers in the First World War, which was unveiled on 4th July 1923 in Place des Etats-Unis, Paris. A likeness of Seeger is depicted on the top of the monument and his words are inscribed on it:

"Hail, brothers, and farewell; you are twice blest, brave hearts,

Double your glory is who perished thus,
For you have died for France and vindicated us."

On Returning to the Front after Leave

Apart sweet women (for whom Heaven be blessed),
Comrades, you cannot think how thin and blue
Look the leftovers of mankind that rest,
Now that the cream has been skimmed off in you.
War has its horrors, but has this of good —
That its sure processes sort out and bind
Brave hearts in one intrepid brotherhood
And leave the shams and imbeciles behind.
Now turn we joyful to the great attacks,
Not only that we face in a fair field
Our valiant foe and all his deadly tools,
But also that we turn disdainful backs
On that poor world we scorn yet die to shield —
That world of cowards, hypocrites, and fools.


Alan Seeger’s Collection of poems, entitled ‘Poems’ was published in December 1916 by Charles Scribner and Sons. The collection is available as a download on Gutenberg. http://www.gutenberg.org/cache/epub/617/pg617-images.html