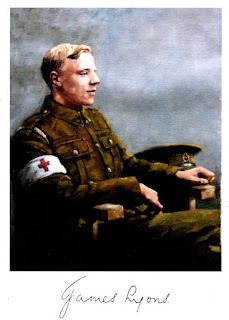 James was born in Winton, Salford, Manchester, UK on 10th September 1896.  His parents were James Lyons, a Provision Merchant, originally from Birmingham, and his wife, Lilian Maria, nee Rogers.

When war broke out, James joined the RAMC as a Private but was invalided out of service in 1917.  He moved to Lytham St. Annes by the sea in Lancashire due to his health problems.  There, he wrote an opera and further poems.  James died on 19th August 1918 and was buried in Peel Green Cemetery, Eccles.

James wrote a poem entitled “Gallipoli – To the Fallen”, which was set to music by his friend Stanley H. Clarke and performed by the Beecham Operatic Choris on 6th November 1918 at a concert in Manchester.

A Shell-wrecked Village at Evening, 1917 by James Lyons

So bleak they stand against the twilit sky,
Those shattered walls that once held love and light.
No gleaming window greets the falling night,
But doubtful shadows on the pathways lie,
To shelter unseen things that start and fly,
Waking these selfsame echoes in their flight
That once caught children’s voices shrill and bright.
Ghosts keep those tumbled ruins – how they sigh! –
Or is but the night wind’s low lament,
Borne from a hundred places scattered wide,
Whence the poor exiles from the village went?
No eye observes the wan moon upward ride,
The place stands  in her pale light scarred and rent,
The silent witness of war’s crucified.


The poet Robert Cochrane, a graduate of Manchester Metropolitan University, has written a fantastic book about James Lyons.  Robert has extensively researched James Lyons and reprinted some of his poems in a book entitled "Do you Remember - the selected poems of James Lyons", published by The Bad Press, Manchester in 2018.  Robert Cochrane has also produced an anthology of WW1 poems entitled "As Ashes follow Fire: Neglected Voices of World War One" (The Bad Press, Manchester, 2018).

James Lyons is featured in Catherine W. Reilly's "English Poetry of the First World War: A Bibliography" on page 206 but the only details Reilly gives are that James was a Private in the Royal Army Medical Corps and that his WW1 poetry collections were "Sons of the Empire, and other poems" (Heywood, Manchester, 1916) and "Gleam o' pearls (poems)" (Cornish, Mancheter 1919).

Robert Cochrane has also produced a CD of some of the poems written by James Lyons which have been set to music.