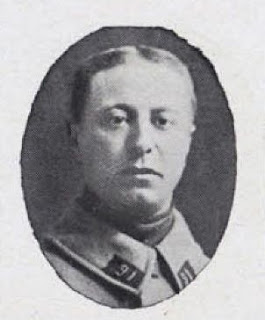 Raymond Armand Alexis Jubert was born on 5th November 1889 in Charleville-Mézières (Ardennes), France. His parents were Ernest and Nathalie Jubert. Raymond studied law and was called to the Bar in Reims.  He volunteered to serve in the French Army in September 1914, joining the 91st R.I. (Infantry Regiment).  In April 1915, Raymond was promoted to the rank of junior officer and posted to the 151st R.I. (known in French as the "Quinze-Un" (151)), seeing  action with them in the forests of the Argonne. On 1st July 1915, Raymond was shot in the foot with a bullet and received eleven grenade splinters in his right arm. His younger brother, Maurice Joubert, was killed fighting in the Argonne. A corporal in the 91st R.I., Maurice disappeared in the Bois de Boulante on 13th July 1915, only short distance from where Raymond had been wounded. Maurice's body was never recovered.

In November 1915, Raymond was promoted to Sub-Lieutenant and served at Verdun in March, April and May 1916, and again during the attack on the Chemin-des-Dames in April 1917, where he was wounded again - in the left arm. During his three years of service with the 151st, Jubert was awarded the Orders of the Division and Army Corps, along with two more in the Orders of the Army. He also received the Chevalier de la Légion d'Honneur and the Croix de Guerre with two palms, and stars of vermilion, gold and silver. His Legion of Honour citation read:

"Brillant officier, of high moral valour, a true leader of men, proven himself in the Argonne, Verdun and the Somme for his gallant conduct under fire. Twice cited in dispatches: on 16 April 1917, brilliantly led his section in the assault, wounded, nevertheless continued to lead the progression and did allow himself to be evacuated until after received orders."

The 151st returned for a fourth tour to Verdun in August 1917 to take part in the French counter-attack on the Right Bank of the River Meuse. Raymond was killed on 26th August 1917 after leading his men in an attack in the Bois des Caurières (Ravin de l'Ermitage). Last seen at the objective -Tranchée Bois de la Chaume - his body was never recovered and, like his brother, Raymond has no known grave. Raymond is remembered on the memorial plaque in the Saint-Rémi Church and on the Monument to the Dead in Charleville-Mézières, France.

During his period of recuperation after seeing action and being wounded at Chemin-des-Dames, Raymond wrote his memoirs which were published as “Verdun (mars-avril-mai 1916)” by Payot, Paris in 1918.

When he was 14 years old, Raymond sent these rather prophetic lines to the French poet François Edouard Joachim Coppée (26 January 1842 – 23 May 1908):