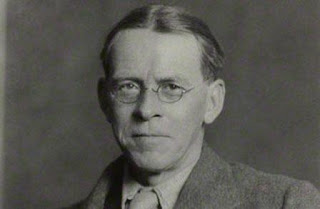 Known later as “The Georgian Poet”, Lascelles Abercrombie was born on 9th January 1881 in Ashton upon Mersey, Sale, Cheshire.  His parents were William Abercrombie, a stock broker, and his wife, Sarah Ann Abercrombie, nee Heron.

Lascelles was educated at Malvern College before going on to study at Owens College, University of Manchester, where he began writing poetry seriously.  After leaving university, Lascelles worked as a clerk in a quantity surveyor’s office in Liverpool, where one of the partners of the firm was a friend of the family.

In 1908, Lascelles published his first collection of poems entitled “Interludes and Poems” and later that year he began working for the newspaper “The liverpool Courier” as a journalist.  Edward Thomas reviewing Lascelles’ poems for “The Daily Chronicle” described his work as “good there is no doubt”.

In March 1909, Lascelles married Catherine Gwatkin and the couple moved to Much Marcle near Malvern in Worcestershire in April 1910.  They then moved to Dymock in Gloucestershire, where Lascelles wrote poetry and worked as a journalist, reviewing the work of modern poets and writing verse drama.  There he became friends with several other poets, among them Rupert Brooke, Robert Frost, Edward Thomas, Wilfrid Wilson Gibson and John Drinkwater – known as the “Dymock Poets”. In 1914, Lascelles and Wilfrid Wilson Gibson began purlishing a literary magazine called “New Numbers” which was published quarterly.

During the First World War, Lascelles worked as a munitions examiner in a shell factory in Liverpool.  Following that, he was appointed to the first lectureship in poetry at The University of Liverpool – a post created specially for him.

Lascelles took on a readership at Merton College, Oxford University in 1935 and in 1937 he became a Fellow of the Royal Academy.   He died in London in 1938.

The WW1 poetry collection of Lascelles Abercrombie was entitled “Lyrics and unfinished poems” and was published in 1940 by P. Gregynog, Newtown, Montgomeryshire, Wales.

“Hope and Despair” by Lascalles Abercrombie

Said God, “You sisters, ere ye go
Down among men, my work to do,
I will on each a badge bestow:
Hope I love best, and gold for her,
Yet a silver glory for Despair,
For she is my angel too.’
Then like a queen, Despair
Put on the stars to wear.
But hope took ears of corn, and round
Her temples in a wreath them bound. –
Which think ye lookt the more fair?