Ernest Miller Hemingway was born on 21st July 1899, in Oak Park, Illinois, a suburb of Chicago, USA, to Clarence Edmonds Hemingway, a physician and Grace Hall Hemingway, a musician.  Ernest was educated at Oak Park and River Forest High School from 1913 until 1917. He was a keen athlete, excelling at a number of sports — boxing, track and field, water polo, and football - performed in the school orchestra for two years with his sister Marcelline and received good grades in English classes. During his last two years at high school he edited the "Trapeze" and "Tabula", the school's newspaper and yearbook.

In December 1917 Ernest responded to a Red Cross recruitment effort and signed on as an ambulance driver in Italy, after having been rejected by the U.S. Army due to poor eyesight. In May 1918 he sailed from New York, arriving in Paris as the city was under bombardment from German artillery. That June he arrived at the Italian Front. On his first day in Milan, he was sent to the scene of a munitions factory explosion to join rescuers retrieving the shredded remains of female workers. He described the incident in his non-fiction book “Death in the Afternoon”:  "I remember that after we searched quite thoroughly for the complete dead we collected fragments." A few days later, he was stationed at Fossalta di Piave. 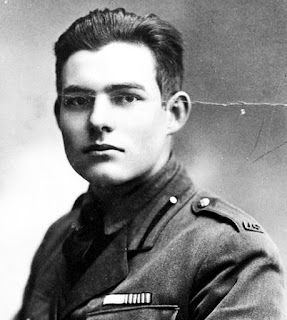 On 8th July, Ernest was seriously wounded by mortar fire, having just returned from the canteen taking chocolate and cigarettes for the men on the front line. Despite his wounds, Hemingway assisted Italian soldiers to safety, for which he received the Italian Silver Medal of Bravery.  He was still only 18 years old at the time. Hemingway later said of the incident: "When you go to war as a boy you have a great illusion of immortality. Other people get killed; not you ... Then when you are badly wounded the first time you lose that illusion and you know it can happen to you."  He sustained severe shrapnel wounds to both legs, underwent an immediate operation at a distribution center, and spent five days at a field hospital before he was transferred for recuperation to the Red Cross hospital in Milan.

Ernest spent six months at the hospital, where he met and formed a strong friendship with "Chink" Dorman-Smith that lasted for decades and shared a room with future American foreign service officer, ambassador, and author Henry Serrano Villard.

While recuperating Ernest fell in love with Agnes von Kurowsky, a Red Cross nurse seven years his senior. When he returned to the United States in January 1919, Ernest believed that Agnes would join him within months and the two would marry. Instead he received a letter in March with her announcement that she was engaged to an Italian officer.

In 1921, Hemingway and his family moved to the Left Bank of Paris (then the literature, art, and music capital of the world) and he became associated with other American expatriates, including F. Scott Fitzgerald, Archibald MacLeish, E. E. Cummings, and John Dos Passos. 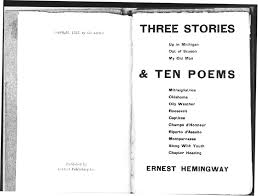