With thanks to Dominic Sheridan of the Australian Great War Poetry Journal who has researched Turner and his work extensively for his commemorative project, for his guidance and inspiration

I was surprised to discover that one of my all-time favourite poems - "Romance" - was written by a WW1 soldier poet. 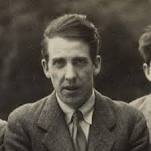 Walter was born in South Melbourne, Australia on 13th October 1889.  His parents were Walter James Turner (1857 – 1900), an organist at St Paul's Cathedral and a warehuseman, and his wife, Alice May Turner (née Watson), who was a musician.  Walter was educated at Carlton State School, Scotch College and the Working Men's College.

After the death of his father, Walter and his mother went to live in Britain. The 1911 Census shows Walter working as a merchant’s clerk and residing in Hugh Street, London, S.W. with his widowed Mother, who is listed as a musician and pianist.   Among the literary personalities of the era, Walter met and became friends with Siegfried Sassoon, Virginia Woolf, Vita Sackville-West, and Lady Ottoline Morrell. Harold Monro, who founded the Poetry Bookshop and helped aspiring young poets to get their work published, included 13 of Walter’s poems in his Georgian Poetry anthologies.

Walter spent ten months travelling and writing in Austria and Germany between 1913 and 1914 and served as a Lieutenant in the Royal Garrison Artillery Anti Aircraft Section from 1916 to 1918.

On 5th April 1918, in Chelsea, London, UK, James married Marguerite Delphine Dubuis (1891 - 1951).   From the First World War until the mid-1930s, Walter was known primarily as a poet. His 1916 poem entitled “Romance” ("Chimborazo, Cotopaxi....") is arguable the most famous of his poems.  Walter dedicated his collection entitled “The Dark Wind” (E.P. Dutton & Co. New York, 1920) to Siegfried Sassoon, with whom he and his wife shared a house on Tufton Street, Westminster, London, before Sassoon moved out in 1925.

W. B. Yeats was "…lost in admiration and astonishment" about Walter’s poetry, including some of Walter’s work in his “Oxford Book of Modern Verse 1892–1935", published in 1936 by Oxford University Press.

Walter was the literary editor of the weekly “Spectator” magazine from 1941 to 1946, and general editor of the Britain in Pictures series. He died in Hammersmith on 18th November 1946.

“Recollecting a Visit to W. B. Yeats” by Walter Turner

It is most pitiful to watch men go

In search of beauty with despairing eyes,

And what it is they lack as this world lies

Open before their gaze they do not know.

These porcelain skies with billows of graven snow

They paint on cold, thin cups, and draw from strings

Voices of mourning winds and sense of wings;

From woods rob sad-faced flowers and bid them grow

Nearer their souls; ay, creep out in the night

And steal the stars and the bright Moon from Heaven,

And bring them home to decorate their dreams

My God it is a strange and pitiful sight

To see the treasury of a poet's room

And him alone there shrouded in beauty's gloom!

Walter’s WW1 poetry collections were: “The Hunter and other Poems”

And his poems were included in eight WW1 poetry anthologies.

“The Sky-Sent Death” by Walter Turner

'A German aeroplane flew over Greek territory, dropping a bomb which

Under the high blue Attic sky;

Along the green monotony

Deep down on the hill and valley,

At the bottom of the sunshine,

Water without wave or ripple,

Sunshine deep and clear and heavy,

Made of purest golden metal,

White Ships heavy in the sky

Pipe a song in that still air,

And the song would be of crystal

Snapped in silence, or a bronze vase

Smooth and graceful, curved and shining.

Tell an old tale or a history;

It would seem a slow Procession

Full of gestures: limbs and torso

White and rounded in the sunlight.

Dug up from the hillside shadow.

In the sunshine deep and soundless

In the sunshine clear and heavy

Came a speck, a speck of shadow —

Shepherd, lift your head and listen,

Listen to that humming Shadow!

In a sleep dreamless as water.

Water in a white glass beaker,

Underneath a sky-blue crystal

In the sunshine clear and heavy

In the sunshine deep and soundless

Burst a star-dropt thing of thunder —

Drooping softly round the hillside.

Boomed the silence in returning

To the crater in the hillside,

To the red earth fresh and bleeding,

To the mangled heap remaining:

Far away that humming Shadow

Vanished in the azure distance.

Sitting on a stone no Shepherd,

But across the hill and valley

Standing carven on the sky-line.

Scattering in the open distance.

Free, in no man's keeping.

From “The Dark Wind”

Dominic Sheridan, writing in his Australian Great War Journal*, has this to say:

"Walter James Redfern Turner - Australia’s Georgian Poet" served in the Royal Garrison Artillery from 1916 - 1918. He was born in South Melbourne, Australia. Writers such as Turner, Frederic Manning, Harley Matthews, Martin à Beckett Boyd and James Griffyth Fairfax, helped give Australia a literary voice in England. Walter wrote 13 poems for the Georgian School. Whether he had meant any of these poems to be chosen is difficult to say, but Harold Monro (poet and publisher) and Edward Marsh (editor), believed that these 13 poems by the expat Australian poet were worthy, not only of consideration, but also inclusion into two of the five anthological volumes of Georgian poetry”

Stephen Cribari, a poet who teaches law in America, has this to say:  “Georgian Poetry only saw maybe five volumes, many of its contributors did not survive The War, but it does seem to have brought the major figures from the end of the Victorian Era together with the poets who would have marked the fullness of the Georgian Era, some of whose writing changed with The War and then changed the arc of English poetry after the war.

Edward Thomas, still in his prose mode, favorably reviewed the first volume.  That was just before Frost turned Thomas toward becoming a poet.  Thomas then submitted poems to Marsh for the second volume, but "Edward Marsh . . . had decided against the inclusion of either Thomas or Frost in his second volume of Georgian Poetry, not caring for Thomas's verse and imposing a new rule to exclude overseas writers from consideration."  Hollis, "Now All Roads Lead to France," p. 248 (Faber & Faber, 2011).  Thomas enlisted in The Artists' Rifles, which attracted as you know many artists and poets including Wilfred Owen.  Though nothing seems to suggest Thomas knew Owen personally, "(o)ther poet members would include two minor Georgians, W.J. Turner and Edward Shanks."  J.M. Wilson, Edward Thomas from “Addlestrop to Arras”, p. 336 (Bloomsbury, 2015).

“The Dark Wind” is available to view as a free download on Archive: