With thanks to Jim Maxwell of the Harlech Old Library for reminding me that I had not yet researched A.A. Bowman 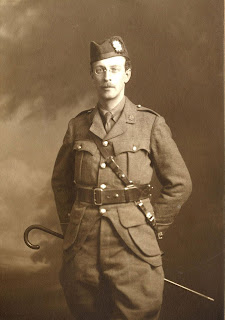 Archibald was born in Beith, Ayrshire, in 1883. His parents were Archibald Bowman, a Minister in a Non Conformist Church in Beith, Fife, Scotland, and his wife, Isabella.  Archibald Junior was the eldest child -  his siblings were James, b. 1885, Thomas, b. 1886 and Margaret, b. 1888.

Educated at Speirs School and Beith Academy, Archibald went on to study at the University of Glasgow from 1901 to 1905, graduating with first class honours in Philosophy and second class honours in Classics.   After graduating, he was appointed assistant to the Professor of Logic at Glasgow University and Lecturer in Logic at Queen Margaret College.

Archibald was offered and accepted the Chair of Logic at Princeton University in 1912, in succession to Dr Hibben. He married Mabel Stewart on Christmas Eve 1912, and together they had three children, Archibald, Alistair and Mary.

When the First World War broke out, Archibald applied for leave of absence in order to join the British Army. Permission was granted in 1915 and Archibald was appointed as an officer with the rank of Second Lieutenant on 13th September 1915, serving in Britain and France with the Highland Light Infantry.  Captured during the Battle of Lys in April 1918, he was taken to Rastatt internment camp for French civilians, which was used as a military transit camp in 1918.  While in captivity he wrote poems – the first poem was written in Rastatt on 26th April and the last one was written on 9th May 1918.   The first poem written in the Officers Camp in Hesepe is dated 19th May 1918.   The collection, entitled “Sonnets from a Prison Camp” was published by John Lane, The Bodeley Head, London in 1919.

In the Foreword, Archibald says: “It ought to be a pleasure to acknowledge generosity in an enemy ; and I wish to express my indebtedness to Captain Hohnholz, Commandant of the Prison-Camp at Hesepe, to whose kindness I owe it that I am able to offer the sonnets as they stand for publication.” Offizier — Gefangenenlager  Hesepe, 17th August 1918.

Two of the poems:

He who hath never from behind toothed wire

The embers of another day expire

Of some spent viking whom the Atlantic flood

Bears dwindling into that infinitude

That great souls end in ; then around the fire

Of his own musings, lodering through the bars

Of a shrunk life, hath sought awhile to limn

His lost felicity — can ne*er divine

The vastness of the common things that line

Infinity with galaxies of stars.

— Our own Immortals ! Ours while we can keep

An isle of quiet for you 'neath the hoar

Shade of the Minster, where the Nation bore

Your mortal relics weeping. Rest you deep I

Rest I And while children's children softly weep

Over you, and the great rose windows pour

A glory round, at peace for evermore

In marble and in alabaster sleep !

— Knowing your England ! Knowing that while

Tries men by fire, these men will not recede

From where their fathers of the early prime

Led them by generations great in deed

To deeds still greater, where on fields sublime

The freebom sons of England bled — ^and bleed I

Sources: Find my Past