With thanks to Jim and Sheila Maxwell of Harlech Library and Institute, Wales and Professor Tim Kendall of Exeter University, who advised Jim to contact me to find biographical information about W.G.Thomas.  My initial suggestions and research (see post  on 15th April 2021) have been added to by Jim. Thanks are also due to John Vallance, to David Ward, Archivist of Oswestry School, to Annette Fulford in Canada and to Al Poole, a Trustee of the Royal Welch Fusilier Museum for their kind help in filling in the details. 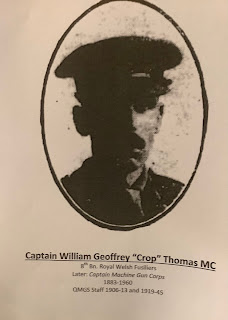 William attended Oswestry School from 1895 to 1902, where he joined the School and College Cricket and Football XIs.  He went on to study at Exeter College, Oxford. He became a Master at Walsall Grammar School and Played fullback for the Corinthians Football Club and also played cricket for the local cricket team. William went to Canada in March 1914 for health reasons, travelling from Liverpool to Halifax in Canada on the Royal Mail Ship ship the “Empress of Ireland”

When war broke later that year, William enlisted at Valcartier, Quebec and served initially as a Sergeant – No. 918 - with the Canadian Expeditionary Force on the Western Front.   William was commisioned as a Temporary Second Lieutenant into the 9th Royal Welsh Fusiliers Regiment on 22 July 1915* and posted to France in July 1915, where he served as a Machine Gun Officer. In March 1916 he was promoted to Temporary Captain.  William was awarded a Military Cross in the January 1917 Birthday Honours List:  “Temp Captain William Geoffrey Thomas, Royal Welsh Fusiliers.” Apparently, William also served with the 5th Battalion of the South Staffords.

William’s WW1 poetry collection “Amateur Soldiers” by W.G. Thomas was published by Old Royalty Book Publishers, London in 1928.   He later published another collection of his poems, entitled ‘Pass of the Acorn Cups’.

John ParryThomas was killed on 3rd March 1927 attempting to break his own world speed record on the Pendine Sands in Wales. Pendine Sands is 7 miles (11 km) of beach on the shores of Carmarthen Bay on the south coast of Wales. It stretches west to east from Gilman Point to Laugharne Sands.

Incidentally, RMS “Empress of Ireland” was an ocean-going liner that sank near the mouth of the Saint Lawrence River in Canada following a collision in thick fog with the Norwegian collier “Storstad” in the early hours of 29th May 1914. Although the ship was equipped with watertight compartments and, in the aftermath of the Titanic disaster two years earlier, carried more than enough lifeboats for all onboard, she foundered in only fourteen minutes. Of the 1,477 people on board, 1,012 died, making it the worst peacetime marine disaster in Canadian history.

*Note: After the 1881 Childers Reforms, the Regiment's official title was The Royal Welsh Fusiliers, but "Welch" continued to be used informally until restored in 1920 by Army Order No.56.

Harlech Library and Institute is a small, Century-old charity in Wales, set up by Jim and Sheila Maxwell as a community reference library.

“The Gentlemen of England” by W.G. Thomas

The gentlemen of England

Have answered to the call,

And city desks are silent

And lonely is the hall:

The ploughboy’s left his horses,

Deserted lies the mine,

And every day they’re making

New batallions of the line.

Are swinging down the street,

And music in their feet:

And the Colonel he is smiling,

For he wonders if they know

His thoughts of them the morning

They first formed up in row.

The gentlemen of England

And Wiltshire trains are puffing

And mules are raising murder,

But they find they have to go:

As the last is slung below.

Are lying dead in France,

Or facing guns and mortars

With a haughty arrogance.

But the Colonel’s almost crying

As he thinks of what he knew –

But he had to send them over

While the main attack got through.

Are sticking it in France:

And they’re ready to advance.

And the captians all are smiling,

And the men are full of go:

This time they get their own back –

They are part of the Big Show. 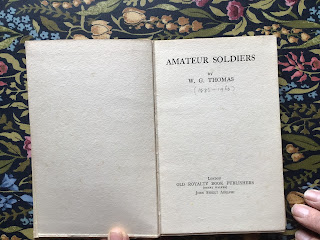 From “Amateur Soldiers” by W.G. Thomas, pp. 11 and 12 - from a photograph of the pages kindly sent to me by Jim and Sheila Maxwell.  A copy of the collection is in the Harlech Library and Institute. The book was presented to Coleg Harlech in 1961 by Professor Stanton Whitfield and he noted the dates 1883-1960 under the author’s name.  Jim and Sheila Maxwell managed to salvage some of the books from the Library of Coleg Harlech when the College closed down recently.  Coleg Harlech was a residential adult education college for mature students in Harlech, Gwynedd, later on part of Adult Learning Wales.
Is William Geoffrey Thomas also the W.G. Thomas who jointly wrote "The Song of the Lewis Gun" with A.S. Barnard, which was printed in Prestwich in 1917?  It consists of 2 pages and there is a copy in the British Library.  They are listed under W.G. Thomas in Catherine Reilly's Bibliography on page 312.  The Lewis gun (or Lewis automatic machine gun or Lewis automatic rifle) was a First World War light machine gun.