With thanks to Jim Maxwell of the Harlech Old Library and Institute for finding Gwilym Williams and contributing this post and thanks to Al Poole, a Trustee of the the Royal Welch Fusiliers Museum, for additional information 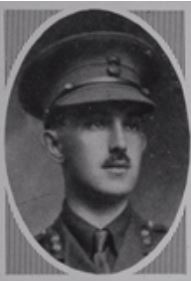 Gwilym was born in Trelech, Carmarthenshire on 18th March 1890, one of 7 children born to William Williams and Esther Williams of St. Clears, Carmarthen. Gwilym attended school in Penybont then went to Carmarthen Grammar School before going on to study at Aberystwyth University, where he graduated in Welch in 1913. He was then assistant master at Newtown County School, and later at Queen Mary's Grammar School Walsall.

Gwilym enlisted in the Army in July 1915. He was commissioned as a Temporary Second Lieutenant on 14th August 1915 into the Royal Welsh Fusiliers Regiment*, assigned to the 12th Res. Bn. He was attached to 17th Battalion, joining them in France from April 1916, until he was wounded by a German rifle grenade in the fighting in the Riez Bailleul sector on 20th May. Gwilym died of his wounds in the 1/2nd London Casualty Clearing Station on Sunday, 21st May 1916. Gwilym was buried in Merville Communal Cemetery, France, Grave reference VII. A. 18.  Gwilym is also commemorated on the Penybont Chapel War Memorial, Trelech, Carmarthenshire, Wales.

After Gwilym’s death, his brother published a book of his poetry in 1917 – “Dan yr Helig” (“Under the Willows”  - 127 pages). There is a striking similarity between Gwilym Williams and Hedd Wynne – both Welsh poets were from large families, and both went away to war never to return.  Interestingly, Gwilym Williams is not among the thousands of poets listed in Catherine W. Reilly's "English Poetry of the First World War: A Bibliography" (St. Martin's Press, New York, 1978).

Gwyilym wrote poetry from a very young age. He was awarded his first Eisteddfod Chair for poetry in the Aberystwyth University Eisteddfod in 1912. The poem had the title "Gwanwyn Bywyd" (The Springtime of Life). By the end of 1914 Gwilym had won three more Eisteddfod chairs.

*Note: After the 1881 Childers Reforms, the Regiment's official title was The Royal Welsh Fusiliers, but "Welch" continued to be used informally until restored in 1920 by Army Order No.56.

There is a silence that confirms,

And life has taught us all to know

One sets aglow a ray of hope,

And tunes the heart to sing,

The other spreads a cloud of doubt

With poison on its wing.

A pause — and we saw fairies dance,

That moment's silence told us both

The all we wished to know.

But when alone, alone I stand

Eternal silence speaks to me

The changeless will of God.

Here is an excerpt from an unfinished work by Williams in Welsh, “Gwladgawrch” (Tr. Patriotism):

Better than a violator’s bribe

Is Belgium’s idea of the free.

Valour and honour we see.

Better than treasure was freedom

Of her patriots countrywide