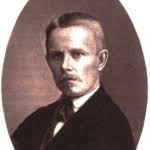 Huw Owen Williams, who took the pen-name Menai, was born in Caernarfon; Wales on 13th July 1886. His parents were William Williams and his wife Elizabeth Williams, nee Williams. Educated at the Ragged School in Caernarfon, Huw left school when he was twelve, later becoming a coal miner at Gilfach Goch. In 1910, he married Anne Jones and they went on to have three sons and five daughters.

Huw began writing poetry during the First World War, contributing to newspapers such as the “Western Mail”.  His friends and correspondents included Wil Ifan, John Cowper Powys and Raymond Garlick.

Huw later moved to Penygraig, a village in the Rhondda Valley in South Wales, and often faced hardship, receiving a civil list pension from 1949 – as suggested by the Rev. Arthur Sturdy, Vicar of St. David’s, Ton Pentry in an atricle in“Glamorgan Advertiser” of 20 January 1922.  The Rev. Sturdy went on to say that the reviewer in “The New Commonwealth” of Huw Menai's collection “Through the upcast Shaft” said: “God made Huw a poet.” 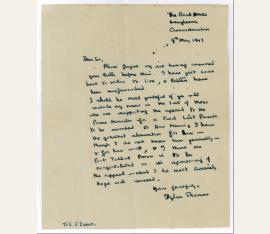 In 1941, Dyland Thomas wrote to E. J. Evans of Skewen, Secretary of the Port Talbot Forum, in favour of a pension to be awarded to the Welsh poet Huw Menai (i.e., Huw Owen Williams, 1886-1961): "Dear Sir, Please forgive my not having answered your letter before this. I have just come back to Wales to live, & letters have been misforwarded. I shall be most grateful if you will include my name in the list of those who are supporting the appeal to the Prime Minister for a Civil List Pension to be awarded to Huw Menai.

Other Work by Huw Menai:

A dream Salamander from the heart leapt free;

“Go through the fire and be cleansed,” said he,

Fear ! it shall fade in it.

All stars are made in it,

Have courage! See upward, how clear they shine!

“Burn with remorse! The dark night burn out of thee;

Burn thyself proof! The will to flight out of thee;

Burn in thine eyes till true sight is restored;

Go through the past again,

Burn theyself clean in the Love of the Lord!”

“Only a Memory” by Huw Menai

Little is left, as well the scarecrow knows,

After War’s killl of corn for rooks to glean . . .

Only a memory is the wild rose,

Only the ghostly trail can now be seen

Of swallows who left all too soon because

Only a memory can help to drown

The sinister droning of our dismal day, -

The sound of Afon Seiont tumbling down

From Snowdon’s heights, or swirling the boulder way

By old Pontrug towards Caernarvon Town,

When life was good and one was young and gay.

Only a memory is now the lark

Singing for joy above the yellow corn;

Only a memory can now embark

To pull the foamy tassels of the thorn;

Only a memory this night so dark

Can find a happy starway to the morn.

OVER the edge – with pomp of passion goes

The fighter of the night, his duty done;

And heaven, blood-stained, remains to mark the close.

So sets the sun.

So set the sun to me.  To boom of gun

My friend set westward for the last repose,

And lost to me, the light which he had won.

And now I’ve but the night to watch my woes;

Yet, in the night, I see beyond the sun

Into the home (I fancy) where the rose

And he are one.

Photograph of Huw Menai from https://prabook.com/web/huw.menai/2118750