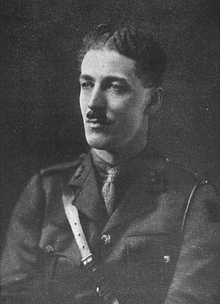 I have just received this from a friend is America who is himself a poet and interested in First World War poetry.

Coningsby Dawson.  Dawson was born in High Wycombe in England, raised in America, attended Merton College, Oxford, became a very minor poet and popular novelist in his day.   When WWI broke out, he went to Canada where he trained in artillery and from where he was sent to the Somme in 1916.  He survived the war, though he was wounded. Dawson's WW1 collection ‘Carry On’ was published by his father, W.J. Dawson, who was also a minor poet.  The book, available as a download on Gutenberg, contains Coningsby’s letters home, which are of significant interest in part because he survived the war, in part because he was highly literate, and in part because he writes from the perspective of an English-American-Canadian man.

In the front of the volume is a poem by Eric P. Dawson, Sub. Lieut, R.N.V.R,, Coningsby’s brother.  Both his brothers served at sea during The Great War.  Here’s the poem, for your collection if you do not already have it:

WHEN THE WAR’S AT AN END

At length when the war’s at an end


And we gather our lives up to mend,


We, who’ve learned how to live and to die:

Shall we think of the old ambition


For riches, or how to grow wise,


We’ve the presence of Death in our eyes?

Shall we dream of old life’s passion—


To toil for our heart’s desire,


Whose souls War has taken to fashion


With molten death and with fire:

I think we shall crave the laughter


Of the wind through trees gold with the sun,


When our strife is all finished, -- after


The carnage of war is done.

Just these things will then seem worth while:--


How to live with a song and a smile,