With thanks to Clive Hughes of the Royal Welch Fusiliers Museum

for finding Owen Evans for us and supplying additional information

and a poem by Owen - with the help of Owen's Granddaughter 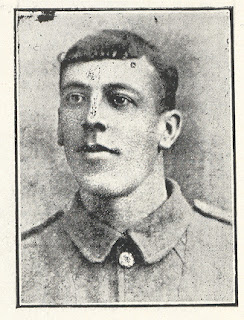 Owen Evans was born on 17th March 1888 at Llaneilian Anglesey, Wales. His parents were Owen Evans, a farmer, and his wife Elizabeth Evans, nee Owen.    Owen’s siblings were Hannah, William, Grace and Elizabeth.   The family lived on a farm in School Lane, Llaneilian, Anglesey.

Owen’s bardic name was that of his father’s farm, "Rhiwlas". He married Sarah Jane Williams in December 1909. Owen was the hwsmon or foreman at Tanrallt Farm at some point.  There came a junior farm servant or farm-boy named John Morris Jones.

In those days it was common for farm workers to agree with their employer in May and October each year whether they would stay on for another 6-month period.  Those who weren't wanted, or who wanted to leave, went to the hiring fair to offer their services to other employers.  John Morris came to the end of his first hiring period, and had given satisfaction, so was offered a second 6-months.  As he started this, he bought himself a new pair of fustian trousers.  The new pants caught the eye of Owen Evans, who was eminently capable of framing rural rhymes, and he got the urge to compose the following:

This translates poetically as:

Trousers fit for a king’s wearing,

But time will tell upon them, leaving

Translated by Howard Huws of Bangor.

During the First World War, Owen enlisted as Private 37345 in the Royal Welsh Fusiliers. When he was posted to the Western Front, he became 44132 in the 11th Battn. South Wales Borderers.  He was a stretcher-bearer and was awarded the Military Medal for gallantry at Pilckem Ridge, 3rd Battle of Ypres, July-August 1917, when he was wounded.

Early in 1918, Owen’s unit was disbanded and he was transferred to the 10th Battn. South Wales Borderers. He was badly wounded in April 1918, probably in the 38th (Welsh) Division's attack at Bouzincourt Ridge on the Somme.  Owen was evacuated and died of his wounds on 30.4.18 in the base hospital in Rouen.  He is buried at St.Sever Cemetery Extension, Rouen, France, Grave reference P. XI. J. 18B.

If you are visiting the St. Sever Cemetery in Rouen you might also like to visit the graves of Richard Molesworth Dennys (1884 – 1916), a Captain in the Loyal North Lancashire Regiment who was wounded on 12th July at Tara Redoubt on the Somme and died on 24th July 1916 in Rouen Hospital.  His Grave Reference is Officers A 4 7.

And Francis St. Vincent Morris (1896 – 1917), a Second Lieutenant in No. 3 Squadron, Royal Flying Corps, attached to the Sherwood Foresters.  He crash landed at Vimy Ridge and died on the operating table at the military hospital in Rouen on 27th April 1917.  Grave Reference Officers B 6 5.

There are also seven women casualties of WW1 in that cemetery and seven more in the Extension Cemetery at Rouen.

NOTE:  The Military Medal (MM) was a military decoration awarded to personnel of the British Army and other arms of the armed forces, and to personnel of other Commonwealth countries, below commissioned rank, for bravery in battle on land. The award was established in 1916, with retrospective application to 1914, and was awarded to other ranks for "acts of gallantry and devotion to duty under fire". The award was discontinued in 1993 when it was replaced by the Military Cross, which was extended to all ranks, while other Commonwealth nations instituted their own award systems in the post war period.

Sources:  Find my Past, Free BMD

Geoffrey was born on 27th November 1889.  Educated at Haileybury School, Hertfordshire before going on to study law at Oxford University, Geoffrey was commissioned into the Royal Fusiliers during the First World War. He became a Lieutenant and served on the Western Front.  After the war he qualified as a lawyer and became a Master of the Bench at the Inner Temple in London.   He died in 1973.

GOD gave us England from of old,

But we held light the gift He gave;

Our royal birthright we have sold,

And now the land we lost for gold

Only our blood can save.

Not till thousands have been slain

Shall the green wood be green again;

Not till men shall fall and bleed

Blood and blood must yet be shed

To make the roses red.

For minds made vile, and blind with greed,

For sins that spread from sire to son;

For loss of honour, loss of creed,

There yet remains one cure indeed —

And there remains but one.

Malvern men must die and kill

That wind may blow on Malvern Hill;

That Devon's bays may yet be blue;

That London's lights may shine.

Lord, for the years of ease and vice,

For hearts unmanned and souls decayed,

Thou hast required a sacrifice—

A bitter and a bloody price—

And lo! the price is paid.

We have given all things that were ours,

We have covered half the earth with gore

The sword Thou hast demanded, Lord:

And, now, behold the sword!