With thanks to Clive Hughes of the Royal Welch Fusiliers Museum for finding this information about another hitherto unknown WW1 Welsh soldier poet. Unfortunately we have not been able to find examples of William’s poems.  If anyone can help please get in touch. 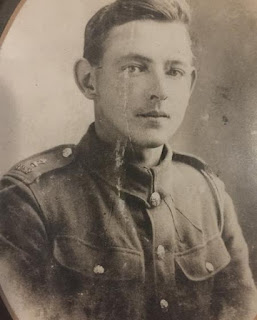 In the 1901 census the family were living at Allt Ddu, Dinorwic.  In the 1911 census they were living at Bron y Fferam (or Bron Fferam), Dinorwig (i.e. near Llanberis), in the house of William’s maternal grandfather, Benjamin Parry. He was recorded as a Quarryman (slate dresser).

William had a bardic name - "Alaw Alltwen" - which is known to his descendants. His bardic name was mentioned in his obituary in a local Welsh language newspaper - “Yr Herald Gymraeg” (The Welsh Herald) - on 24.12.18 p3 : 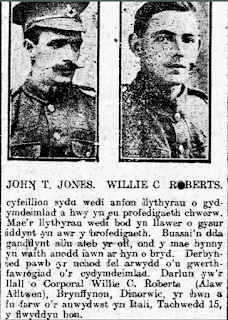 The town of Giavera is in the Province of Treviso. It is 12 kilometres east of Montebelluna and 14 kilometres west of Conegliano on the main road between the two places. Giavera British Cemetery is 500 metres north-west of the town close to the church. The Italians entered the war on the Allied side, declaring war on Austria, in May 1915. Commonwealth forces were at the Italian front between November 1917 and November 1918.

The Royal Welch Fusiliers (In Welsh: Ffiwsilwyr Brenhinol Cymreig) was a line infantry regiment of the British Army and part of the Prince of Wales' Division, founded in 1689 shortly after the Glorious Revolution. In 1702, it was designated a fusilier regiment and became The Welch Regiment of Fusiliers; the prefix "Royal" was added in 1713, then confirmed in 1714 when George I named it The Prince of Wales's Own Royal Regiment of Welsh Fusiliers. After the 1751 reforms that standardised the naming and numbering of regiments, it became the 23rd Foot (Royal Welsh Fuzileers).

The RWF retained the archaic spelling of Welch, instead of Welsh, and Fuzileers for Fusiliers; these were engraved on swords carried by regimental officers during the Napoleonic Wars. After the 1881 Childers Reforms, its official title was The Royal Welsh Fusiliers, but "Welch" continued to be used informally until restored in 1920 by Army Order No.56.

Information sent to me by Clive Hughes.