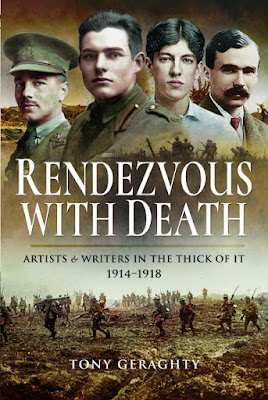 I only wish this amazing book had been available when I first started researching in May 2012 for a series of commemorative exhibitions about the poets of the First World War.   Although most of the poets, writers and musicians featured in the book are well-known, Geraghty has a completely new take on them, as he goes into great detail about the battles in which they were involved, killed or wounded.  Geraghty’s lifetime of experience as a professional soldier and as a war correspondent undoubtedly bring to this book a more sympathetic and enlightened view from the point of view of those who served.

You will also find in the final chapter, the personal story of Geraghty’s relatives who served during the conflict.  There is a detailed bibliography, a copious notes section for each chapter and an index.

I don’t want to give too much away - I found the whole book fascinating but was particularly interested in Chapter Two – ‘Wilfred Owen: Poet, Hero … But ‘Malingerer’?’ - as I went to school just around the corner to where Wilfred was educated in Birkenhead, Wirral.  My school had close connections with the composer Vaughan Williams, so Chapter Nine was also of great interest – ‘Vaughan Williams, Composer: ‘No Longer A Man’ But His Lark Ascends Still’ - a clever reference to one of Vaughan Williams’s most famous works.

The Chapter about Erskine Childers – Chapter Ten – was also of particular interest as I am just putting the finishing touches to an exhibition commemorating poets and writers of WW1 who were in the Royal Flying Corps or the Royal Naval Air Service, which amalgamated to become The Royal Air Force on 1st April 1918.  And Chapter Eleven – ‘The Red Cross Men – Age Did Not Weary Them’ - I also found most enlightening.