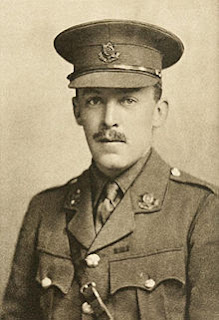 Stanley Kaye has just sent me details of another forgotten poet of the First World War.

When war broke out, David initially joined the 1st London Regiment, enlisting in Kingston, Surrey.  He transferred to the 1st Battalion of the Grenadier Guards as a Guardsman and died of wounds sustained in France on 11th October 1918.  David Geoffrey Collins was buried in Delsaux Farm Cemetery, 62124 Beugny, Pas de Calais, France.

Sources:  Find my Past and Free BMD

If anyone has a photograph or any of Davis's poems please get in touch.  Many thanks to Stanley Kaye for finding another forgotten poet of The First World War.   I have added David's name to the list of Cemeteries where poets are buried.

Francis Kennard Bliss was born in 1892 in Richmond, Surrey, UK.   His parents were Francis Edward Bliss, a petroleum merchant from New York, USA and his wife Agnes K. Bliss, nee Davis from Rochester, Kent, UK.  Francis's siblings were Arthur (b. 1891) and James Howard (b. 1894).  The boys' mother, Agnes died in 1895 and the children were brought up by their father, from whom they inherited a love of the arts.  The family lived in Holland Park, London.

Educated at Bilton Grange Preparatory School and Rugby School, Francis won a Classics Scholarship and went on to study at King's College, Cambridge where he joined the debating group known as The Apostles.   He was a gifted clarinet player.   According to the Director of External Relations at Bilton Grange School, "...Arthur always said that Francis was the most talented of the three brothers."

When war broke out, Francis initially joined the Artists' Rifles as a Private but was commissioned into the Royal Field Artillery on 9th July 1915 and posted to the Western Front in November 1915.

At the time of his death on 28th September 1916 during The Somme Offensive near Thiepval, Francis was an Acting Forward Artillery Observation Officer.  He is buried in Aveluy Wood (Lancashire Dump) Cemetery, 80300 Mesnil-Martinsart, France.

Francis's brother Arthur, who joined the Army and  also served on The Somme during WW1,  went on to become famous and was knighted for his services as a composer.  Arthur wrote a piece of music in memory of his brother Francis, dedicating it to all who were killed in the same battle.  "Morning Heroes A Symphony for my brother and comrades killed in the war" was written as a Symphony for Orator, Chorus and Orchestra in 1930.

I have not yet been able to find any poetry written by Francis but I am hoping to put that right soon.

My thanks to Michael Copp who has written some fantastic books about First World War poets. Michael advised me to have a look at Tim Cross's anthology.
Posted by Lucy at 01:38 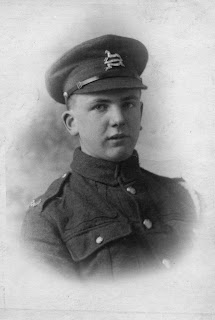 
After attending Haileybury School in Great Amwell, Ware, Hertfordshire, Walter obtained his BA in Classics from Oxford and went to Edinburgh University where he studied law from 1909 till 1912.  He had joined the cadet corps in 1902 while at Oxford and became a Lieutenant in February 1913.   By 1914, Walter was a Staff Captain and he joined the 9th Royal Scots Regiment of the Lothic Brigade.  He was posted to France in 1915 and was killed on 8th May 1915 at Ypres.  He was 28 years old and was, according to Alastair Shepherd, the first Scottish Advocate to be killed during the First World War.
Walter is commemorated as “One of the War Poets” on the Menin Gate Memorial at Ypres, on Panel 11.


Walter’s WW1 poetry collection “Easter at Ypres, 1915, and other poems” was published by Maclehose, Glasgow in 1916.

Two of Walter's brothers were killed in WW1 and another died while at school.


With thanks to Yvon Davis for spotting Alastair Shepherd’s research in “The Scotsman” into Scottish Advocates of the First World War http://www.scotsman.com/news/first-scottish-advocate-to-die-in-great-war-revealed-as-poet-who-wrote-in-trenches-1-4196214