Poets of the First World War

If you haven’t yet discovered Connie Ruzich’s weblog Behind their Lines, now is your chance!  Connie has a very different approach to the poets and poetry of the First World War, but I think we complement each other and Connie's posts are always very interesting indeed.   Here is the link to Connie’s weblog https://behindtheirlines.blogspot.com/

As you are probably aware, my project is an exhibition project and exhibitions are aimed at members of the general public.   The weblogs and Facebook pages are a spin-off which we decided to set up when we realised I was collecting a great deal of information.

Exhibition panels are sent by e-mail free of charge to anyone wishing to host an exhibition. Full list of panels available to date can be sent on request.


Here is a link to a news report about the opening of the exhibition Poetry Written by Schoolchildren during WW1 on 17th March 2018:  https://www.youtube.com/watch?v=78b40hAbqb8

I know have written a post about Rupert Brooke before but I haven’t yet tackled the poets of 1914 and 1915 and I am trying to put that right.  I recently found this quote:


"There are three good things in this world. One is to read poetry, another is to write poetry, and the best of all is to live poetry."    Rupert Brooke 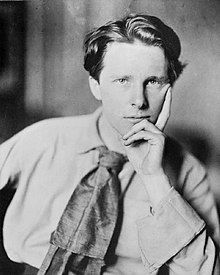 Rupert was born in Rugby, Warwickshire, UK, on 3rd August 1887 -  the third of four children born to William Parker ("Willie") Brooke, a schoolmaster, and Ruth Mary Brooke, née Cotterill, a school matron. He was named after a maternal great-grandfather - Rupert Chawner (1750–1836

When Rupert was born, his father was Master of School Field House at Rugby School. His elder brother was Richard England "Dick" Brooke (1881–1907), his sister Edith Marjorie Brooke was born in 1885 and died the following year, and his younger brother was William Alfred Cotterill "Podge" Brooke (1891–1915).

Rupert was educated locally at Hillbrow Preparatory School, before going on to Rugby School.  While travelling in Europe he prepared a thesis entitled "John Webster and the Elizabethan Drama", which won him a scholarship to King's College, Cambridge. At university he became a member of the Apostles, was elected as president of the Fabian Society, helped found the Marlowe Society drama club and acted.

He became acquainted with members of the Bloomsbury Group of writers – among them Virginia Woof, Vita Sackville-West - and was one of the Dymock poets.

Rupert enlisted at the outbreak of war in August 1914. He came to public attention as a war poet early the following year, when “The Times Literary Supplement” published two sonnets ("IV: The Dead" and "V: The Soldier") on 11th March; the latter was then read from the pulpit of St Paul's Cathedral on Easter Sunday (4th April).

Rupert's poetry gained many enthusiasts and followers and he was taken up by Edward Marsh, who brought him to the attention of Winston Churchill, then First Lord of the Admiralty. Rupert was commissioned into the Royal Naval Volunteer Reserve as a Sub-Lieutenant, joining the Hood Battalion, 2nd Brigade, R.N. Division.  He took part in the Royal Naval Division's expedition to Antwerp in Belgium in 1914.

Rupert's Division was en route for Gallipoli in a troopship escorted by the Dreadnought Battleship "The Prince George" in 1915, when they put into Treis Bouke Bay near the Greek Island of Skyros for provisions.  According to the log of the hospital ship on which Rupert was treated, he went exploring, was bitten by a mosquito and became ill however, it is possible he may already have been ill before arriving on the Island.   Rupert was transferred by cutter from "The Prince George" to the French Naval Hospital Ship "Duguay-Trouin", a converted French Naval destroyer, for treatment but he died on 23rd April 1915.

As the expeditionary force had orders to depart immediately, Rupert was buried at 11 pm in an olive grove on Skyros. The site was chosen by his friend musician and composer, William Denis Browne.  Another friend – the poet Patrick Shaw Stewart – was a member of the firing party at Rupert’s funeral. Australian musician, composer and Olympic rower, Frederick Septimus Kelly, wrote his "Elegy, In Memoriam Rupert Brooke for harp and strings" after attending Brooke's death and funeral. He also took Brooke's notebooks containing important late poems for safekeeping and later returned them to England

When First World War was over, Rupert’s mother wanted him to have an appropriate grave. WW1 soldier poet Stanley Casson was working in Athens at the time and was approached by a friend at the British Legation regarding the placing of a tomb over the grave of Rupert Brooke. With his knowledge of Greek sculpture, Casson was the ideal person to supervise and organise the construction and transport of the two and a half tons of marble and iron railings that you will see if you visit Rupert's grave today.

The logistics of the operation are quite remarkable and are detailed in a book called "Steady Drummer" written by Stanley Casson and published in 1935 by G. Bell of London.   Lady MacLellan has kindly sent me a copy of the section concerning the grave of Rupert Brooke.  Casson had to hire a boat to transport the marble, then get to the island himself.  Once there, he had to build a small quay for the unloading of the seven or so crates containing the marble.  Once on land, there was the problem of getting the crates up the hill to the site of the grave via the only road - which was a rough goat track. 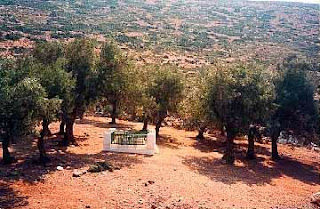 Returning briefly to Athens to fetch some tools to complete the task, Casson enlisted the help of writer Norman Douglas.  The pair returned to Skyros and oversaw the completion of the laying of marble tomb over Brooke's grave.  Finally, Casson had the tomb consecrated by the head of the local monastery of St. George.

Rupert’s most famous WW1 poem is perhaps “The Soldier”

"The Soldier"
If I should die, think only this of me:
That there’s some corner of a foreign field
That is for ever England. There shall be
In that rich earth a richer dust concealed;
A dust whom England bore, shaped, made aware,
Gave, once, her flowers to love, her ways to roam;
A body of England’s, breathing English air,
Washed by the rivers, blest by suns of home.

And think, this heart, all evil shed away,
A pulse in the eternal mind, no less
Gives somewhere back the thoughts by England given;
Her sights and sounds; dreams happy as her day;
And laughter, learnt of friends; and gentleness,
In hearts at peace, under an English heaven.