It is always exciting to discover a hitherto unknown WW1 soldier poet and our thanks go to Historian Andrew Mackay for discovering Thomas, sending me his findings and giving me permission to share them.. 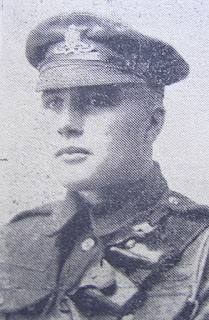 Thomas was born in 1894 in Burnley, Lancashire.  His parents were William Arthur Quarmby, an architect/surveyor, and his wife, Florence Mary Quarmby, nee Buck, and he had a brother, George Gilbert, born in 1899.  By all accounts, Thomas was a bright lad for he was awarded a scholarship to study at a grammar school and his love for poetry was evident at an early age.

When he was 16, Thomas went to study at Victoria University, Manchester (now part of Manchester University), before working at the textile mill Collinge Brothers, Burnley Wood Mill Company, for about two and half years learning the manufacturing business.

When war broke out, Thomas enlisted in the Royal Field Artillery as a Gunner (Private), joining ‘C’ Battery of the 161st Brigade.  He was posted to France and though he was promoted to the rank of Bombardier (Corporal), he preferred being a Gunner and reverted to that rank. Thomas was wounded and died of his wounds on 3rd December 1917.  He was buried in Grevillers British Cemetery, France – Grave Reference: IXA.14.

Andrew’s research found this additional information: A remarkable incident occurred a few months after his death - in a postscript to his last letter of the 30th November 1917, Thomas stated that he had discovered two books were missing from his kit - “Carlyle’s Essays” and “Byron’s Poems”, in both of which his home address had been written. On 14th March 1918, Thomas’s parents received a parcel from a Major commanding a Field Company of Engineers, containing the aforementioned books, which the officer explained “had been picked up on the battlefield a few days ago and is returned to you on account of sentimental value attached to the present. We have no knowledge of the whereabouts of the owner.”

Thomas had written some verses in the books in pencil:

Make Thou the nation pure,
More worthy of thy care;
Oh England!  If thou would’st endure’
Seek thou thy path in prayer.
Thy wisdom light our way
So in years to be;
More happy we each passing day,
As we draw near to Thee.

Gunner Quarmby’s patriotism was revealed in the following excerpt from one of his letters written prior to his leaving for France: “It looks as if we are going to be involved in the big smash up on the Western Front that is impending, although I have a fancy that we shall be used rather as reinforcements than actually take a premier early important part in the fighting."

Thomas had a gift for writing poetry and almost all of his letters contained some poetic composition.  The following is one of his last compositions:

Oh when the dusk is falling, and the stars
Flash their reveille to the realm of the night;
Me thinks that Nature, all her souls unbars;
And fills each common thing with mystic light
Then come there whispering from the leafy trees,
A subtle rustle from the swaying reeds;
Ten thousand murmurs from the evening breeze,
Nectar on which the heart poetic feeds.

Then do I sit and muse, as twilight drops
Her  last slow ray upon the dim lit plain;
Until pale stars come peeping o’er hilltop,
And set the scene for nature’s highest strain,
Eternity!  I hear they whispers throng,
Oh! Could I weave them all, into my song.

Andrew researched in Burnley Library.  He has a website which can be viewed here:

War Memorials of the British Isles 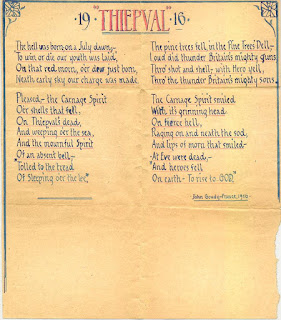