Dugald Sutherland MacColl was born in Glasgow on 10th March 1859.  His father was the Reverend Dugald MacColl.

Educated at the University of London before going up to the University of Oxford, Dugald went on to study at the Westminster School of Art and the Slade School under Alphonse Legros.  He became Keeper of the Wallace Collection and of the Tate Gallery. He was an artist, art critic, poet and founder of the National Art Collections Fund. Dugald was friendly with many of the literary figures of the day - W.B. Yeats, George Bernard Shaw, Lady Gregory, Max Beerbohm, H.G. Wells, Charles Ricketts, Augustus John, Auguste Rodin, Roger Fry and Walter Crane.  He was the art critic for "The Spectator" and "The Saturday Review" between 1896 and 1906.


“The Miners’ Response” by D.S. MacColl

We do; the present desperate stage
Of fighting brings us luck
And in the higher war we wage
(For higher wage) We struck.


D.S.MacColl’s First World War poetry collections were:
“Another neutral” (Maclehose, Glasgow, 1915
“Bull, and other war verses” (Constable, 1919)
“A German peace, flyting to Herr Houston Stewart Chamberlain” (Maclehose, Glasgow,1916)
“A Merry New Ballad of Dr. Woodrow Wilson, President of the United States in America” (Maclehose, Glasgow, 1915)
He also had a poem published in the WW1 poetry Anthology “Up the Line to Death: The War Poets 1914 – 1918” Edited by Brian Gardner, with a Foreword by Edmund Blunden  (Methuen, London 1964)

The portrait of Dugald MacColl was painted by his nephew the artist Donald Graeme MacLaren in 1906.  Donald joined the Army in WW1 and was killed in Belgium in 1917 – see www.fascinatingfactsofww1.blogspot.co.uk 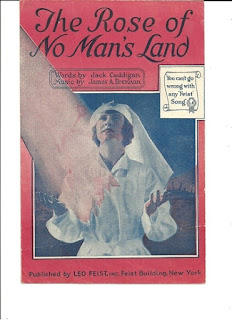 It was written as a tribute to the Red Cross nurses of the First World War.

Music publisher Leo Feist published a version in 1918 as "La rose sous les boulets", with French lyrics by Louis Delamarre. A version with English lyrics by Jack Caddigan and James Alexander Brennan was published by Jack Mendelsohn Music in 1945. Herman Darewski and others also published versions in 1918 and in 1945.

Jack Caddigan (1879 – 1952) – was a lyricist of Irish origin, born in Canada but brought up in Boston, Massachusetts, USA

I've seen some beautiful flowers
Grow in life's garden fair
I've spent some wonderful hours
Lost in their fragrance rare
But I have found another
Wondrous beyond compare....

Out in the heavenly splendour
Down to the trail of woe
God in his mercy has sent her
Fearing the World below
We call her Rose of Heaven
We've longed to love her so....

Other lyrics written by Caddigan:

Other songs by Brennan:

With thanks to Historian Debbie Cameron who has the Facebook Page Remembering Women on the Home Front WW1 for posting the link to the song this morning (7th August 2018) and to Sue Robinson of the Group Wenches in Trenches The Roses of No Man's Land for her post about the song in November 2016 (see Inspirational Women of WW1 weblog).