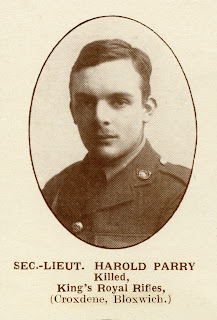 With many thanks to Lynne Sidaway who suggested I research this forgotten WW1 poet, and to John Vallance, Archivist at Queen Mary’s Grammar School for additional information.
Harold was born one of twins in Bloxwich, Walsall, West Midlands, UK on 13th December 1896.  His parents were David Ebenezer Parry, a mining engineer and colliery manager, and his wife Sarah, nee Arkinsall.  Harold's siblings were:  Donald b. 1891, Dorothy, b. 1892, and Victor, his twin.


Educated initially at a local preparatory school, Harold went on to Queen Mary’s Grammar School, Walsall, where he joined the Cadet Corps, wrote poetry and excelled at cricket and football.   He went on to study at Oxford University.


Harold volunteered to join the Army in January 1916 and was commissioned as a Second Lieutenant into the King’s Own Yorkshire Light Infantry.   Transferred to the 17th Battalion of the King’s Royal Rifle Corps, Harold was posted to the Western Front, where he continued to write poetry.
Harold was killed on 6th May 1917 at Ypres and was buried in Vlamertinghe Military Cemetery, West Flanders, Belgium.   He is also commemorated in Field Road Cemetery, Bloxwich.
Harold Parry’s WW1 poetry collection “In Memoriam Harold Parry” - Parry's Poems and Letters, with a Foreword by Geoffrey P. Dennis, was published by W.H. Smith in 1918. 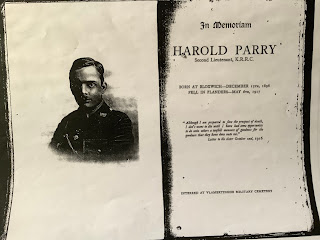 "Tommy's Dwelling"
I come from trenches deep in slime,
Soft slime so sweet and yellow,
And rumble down the steps in time
to souse "some shivering fellow".
I trickle in and trickle out
Of every nook and corner,
And, rushing like some waterspout,
Make many a rat a mourner.
I gather in from near and far
A thousand brooklets swelling,
And laugh aloud a great "Ha, ha!"
To flood poor Tommy's dwelling.
Sources:  Catherine W. Reilly “English Poetry of the First World War – A Bibliography” (St. Martin’s Press, New York, 1978), p. 249.
Find my Past, Free BMD,
http://webwalsall.com/local-history-centre/?page_id=29
https://thebloxwichtelegraph.com/2011/11/13/remembering-harold-parry/
John Vallance, Archivist at Queen Mary’s Grammar School
Posted by Lucy at 10:09 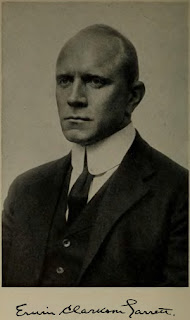 While looking for information about British soldier poet Nathan Percy Graham, I came across Erwin Clarkson Garrett, an American soldier poet of the First World War.

Erwin was born on 28th March 1879 in Germantown, Philadelphia in the United States of America. His parents were George L. Garrett and his wife Sophia Cooper Garrett, nee Gray.


In 1906, Erwin graduated with a Bachelor of Science degree from the University of Pennsylvania.  He enlisted as a Private in the American Army and served during the Philippine Insurrection of 1899 – 1902 in the 23rd Infantry.


Erwin then travelled around the world.   In 1916 he published “Army Ballads and Other Verses”.


In August 1917, following the entry of America into the First World War, Erwin travelled at his own expense to France, where he enlisted in the American Army in Paris on 1st September 1917.  He served as a Private in Co. “G” of the 16th Infantry of the AEF and was awarded the Purple Heart and Silver Star.


In 1919, Erwin published “Trench Ballads, and Other Verses” which were all written while he was in the Trenches on the Western Front - published in 1919 by The John C. Winston Company, Philadelphia, USA.   The collection is available as a free down-load on Project Gutenberg and if you scroll down you will not only find his poems but also copious notes about his time in France, which are fascinating:  http://www.gutenberg.org/files/40379/40379-0.txt