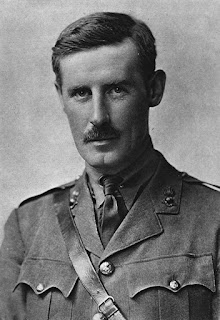 Herbert Asquith senior was the British Prime Minister from 1908 until 1916 when he became ill following the death during the Somme Offensive of his eldest son Raymond.


And his poems were published in 21 WW1 anthologies.


The starshells float above, the bayonets glisten;
We bear our fallen friend without a sound;
Below the waiting legions lie and listen
To us, who march upon their burial-ground.


Wound in the flag of England, here we lay him;
The guns will flash and thunder o’er the grave;
What other winding sheet should now array him,
What other music should salute the brave?


As goes the Sun-god in his chariot glorious,
When all his golden banners are unfurled,
So goes the soldier, fallen but victorious,
And leaves behind a twilight in the world.


And those who come this way, in days hereafter,
Will know that here a boy for England fell,
Who looked at danger with the eyes of laughter,
And on the charge his days were ended well.


One last salute; the bayonets clash and glisten;
With arms reversed we go without a sound:
One more has joined the men who lie and listen
To us, who march upon their burial-ground. 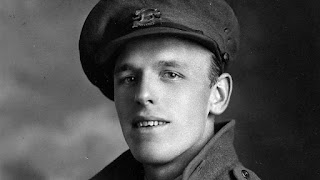 
Arthur Newberry Choyce was born in Hugglescote, Leicestershire, UK in 1893.  His parents were Benjamin Choyce, a carpenter, and his wife Mary Ann Choyce, nee Newberry.  The Leicestershire village in which the family lived was near Coalville, about ten miles from Loughborough.


At the outbreak of war, Arthur joined the Leicestershire Regiment as a Second Lieutenant.  He was sent to the Western Front where he saw action during the Somme Offensive in 1916.


Wounded on 15th June 1917, Arthur sheltered for twenty hours in a shell hole before being rescued and sent for treatment.


When he had recovered sufficiently he was sent to America on a speaking tour, reciting his poems to great acclaim, encouraging Americans to join in the fight.


After the war, Arthur continued writing and publishing his work.  He became headmaster of Snibston village Primary School in Coalville, Leicestershire.   Arthur died in 1937 in Ashby-de-la-Zouche.


"Memory: poems of war and love" published in New York by John Lane in 1918. Which you can find here:  https://archive.org/details/memorypoemsofwar00choy and


Arthur also had some poems published in the WW1 Anthology "Soldier Poets: more songs of the fighting men" edited by Galloway Kyle and published by Erskine Macdonald in 1917.


Arthur wrote a poem while crossing the Atlantic in April 1918 but it does not reflect the dangers of such a journey.  Tad Fitch and Michael Poirier have written a book that describes in details the perils of crossing the Atlantic – “Into the Danger Zone”.  For a review please see http://fascinatingfactsofww1.blogspot.co.uk/2015/01/book-review-into-danger-zone-sea.html


The little song that you sing to me
Seems part of the sea’s own melody
(We are alone, just you and I).
It is late … you wanted to see the moon.
Have you heard that we come to harbour soon?
(How swiftly the stars and the sea slip by!).


Churned in the wonderful waves below
Clusters of phosphorous fishes glow,
(How swiftly the stars and the sea slip by!)
And we who have just a remaining day
Are silently staring our dreams away…
(We are alone, just you and I). 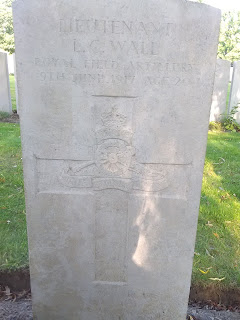 An exhibition featuring some of the poets, writers and artists involved in the Battles of Messines (Mesen), Passchendaele and after in 1917 is currently on display at The Wilfred Owen Story, 34 Argyle Street, Birkenhead, Wirral, CH41 6AE.  Entry is free.  The WOS is open Tuesdays to Fridays from 11 am until 2 pm but it is advisable to telephone first - 07903 337995.