With thanks to Connie Ruzich for jreminding m e that I had not yet researched Heathcote. 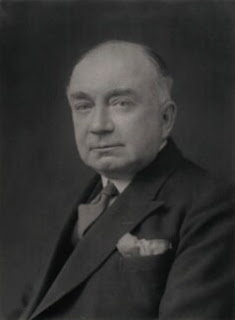 Heathcote was born in Wells, Somerset, UK on 21st January 1878, the fifth of six children. His parents were Charles William Garrod, a solicitor, and his wife, Louisa (née Ashby).  Educated at Bath College and Balliol College, Oxford, Heathcote received the Gaisford prize for Greek prose in 1900 and in 1901 the Newdigate Prize for a poem written in English.  Gaining a first class degree in the Final Honour School of Literae Humaniores in the summer term of 1901, in October that year Heathcote was elected a Fellow of Merton College, Oxford, a position he occupied for more than 60 years.

This remark is often attributed to other, more famous people, however, reliable sources give him as the person who, when accosted by a woman during the First World War asking why he was not with the soldiers fighting to defend civilisation, replied: "Madam, I am the civilization they are fighting to defend."

Heathcote was appointed Oxford Professor of Poetry from 1923 to 1928. In 1925, he resigned his tutorship in classics at Oxford for a research fellowship in English, which had been vacant after the death of W. P. Ker. From 1929 to 1930, he was the Charles Eliot Norton professor at Harvard University.

Heathcote never married and died at the Acland Nursing Home in Oxford on Christmas Day 1960.

His short WW1 poem "Epitaph Neuve Chapelle" remembers Indian troops and those who fought and died in #WW1 with unquestioning bravery.

Paul Bewsher was born on 12th November 1894 in Fulham, London, UK.  When war broke out, Paul joined the Royal Navy and served aboard HMS “Manica” as an air mechanic balloon hand during the Gallipoli Campaign.  He was then posted to Manston in Kent for training with the Royal Nval Air Service, before going to France as an Observer/Bomber on the Handley Page night bombing missions, with the rank of Lieutenant.

Paul learnt to fly while based with a Squadron in Luxeuil-les-Bains and was promoted to the rank of Captain.  He was shot down during a bombing mission over the Zeebrugge Mole on the night of 10th – 11th April 1918.  Paul published his war-time experiences and here is a brief extract from his book:

“I wish to explain my reasons for describing always my own feelings, my own experiences, my own thoughts. I feel that the lay public who did not fly in the war, and knew little of its excitements and monotonies, would rather hear of the experiences of one person, related by himself, than merely a journalistic record of events which had come to his notice. Therefore I have tried faithfully to describe the sensations, the strange inexplicable fears, the equally inexplicable fearlessness, of a desk-bound London youth, pitchforked in a moment into the turmoil of war, and into a hitherto unknown, untried
occupation--bombing at night from the air.”

We fly over three or four little trawlers steaming slowly along, dredging the waterway for mines. Then over two leaning masts of some wreck, which pierce the water like thin lances. Next we pass above a Belgian relief ship, advertising its nature by means of innumerable placards and flags and colours, which are yet not sufficient to keep it immune from the Germans and their unreliable promises. Now it is a familiar line of mud-hoppers carrying a load of dredged mud to some deep dumping-ground. Now over a couple of lean grey torpedo-boats, nosing everywhere, carefully and suspiciously, protecting the Channels.

So at times over ever-varying craft, and at times over grey wet loneliness, we travel on in our long patrol, until at last the squat red shape of a lightship appears through the haze, and we know that we have reached the limit of our outward journey. We sweep low over the isolated vessel, wave our hands to the men on board, and start to return home by a different route, and roar on over mile after mile of water glittering in the sun, which is slowly dissipating the mist of early morning.”

From “'Green Balls' : The Adventures of a Night-Bomber” by Paul Bewsher (William Blackwood and Sons, Edinburgh and London, 1919) http://www.gutenberg.org/cache/epub/37392/pg37392.txt

Paul Bewsher’s WW1 poetry collections were “The Bombing of Bruges and other poems” (Hodder & Stoughton, London, 1918) and “The Dawn Patrol and other oems of an aviator” (Erskine Macdonald, London, 1917).  His poems were included in thirteen WW1 poetry anthologies.

“THE DAWN PATROL” By Paul Bewsher

SOMETIMES I fly at dawn above the sea,
Where, underneath, the restless waters flow—
Silver, and cold, and slow.
Dim in the east there burns a new-born sun,
Whose rosy gleams along the ripples run,
Save where the mist droops low,
Hiding the level loneliness from me.

And now appears beneath the milk-white haze
A little fleet of anchored ships, which lie
In clustered company,
And seem as they are yet fast bound by sleep,
Although the day has long begun to peep,
With red-inflamèd eye,
Along the still, deserted ocean ways.

The fresh, cold wind of dawn blows on my face
As in the sun’s raw heart I swiftly fly,
And watch the seas glide by.
Scarce human seem I, moving through the skies,
And far removed from warlike enterprise—
Like some great gull on high
Whose white and gleaming wings beat on through space.

Then do I feel with God quite, quite alone,
High in the virgin morn, so white and still,
And free from human ill:
My prayers transcend my feeble earth-bound plaints—
As though I sang among the happy Saints
With many a holy thrill—
As though the glowing sun were God’s bright Throne.

My flight is done. I cross the line of foam
That breaks around a town of grey and red,
Whose streets and squares lie dead
Beneath the silent dawn—then am I proud
That England’s peace to guard I am allowed;
Then bow my humble head,
In thanks to Him Who brings me safely home.

The afternoon
Flutter and dies:
The fairy moon
Burns in the skies
As they grow darker, and the first stars shine
On Night’s rich mantle – purple like warm wine.

On each white road
Begins to crawl
The heavy load:
The night-birds call,
And round the trees the swift bats flit and wheel,
While from the barns the rats begin to steal.

So now must I,
Bird of the night
Towards the sky
Make wheeling flight,
And bear my poison o’er the gloomy land
And let it loose with hard unsparing hand.

The chafers boom
With whirring wings,
And haunt the gloom
Which twilight brings –
So in nocturnal travel do I wail
As through the night the wing-ed engines sail.

Death, Grief, and Pain
Are what I give,
O that the slain
Might live – might live!
I know them not for I have blindly killed,
And nameless hearts with nameless sorrow filled.

Thrice curs-ed War
Which bids that I
Such death should pour
Down from the sky.
O, Star of Peace, rise swiftly in the East
That from such slaying men may be released.