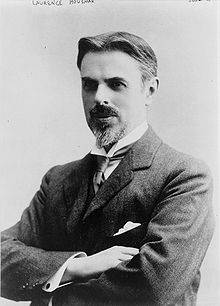 Laurence was born in Bromsgrove, Worcestershire on 18th July 1865. His parents were Edward Houseman and his wife, Sarah Jane, née Williams.   He was one of seven children – among his siblings were the poet Alfred Edward (A. E.) Housman (b. 26th March 1859) and the writer Clemence Housman (b. 23rd November 1861).

His mother died in 1871 and in 1873 his father married one of his cousins - Lucy Agnes Housman. Educated inititially at Bromsgrove School, Laurence went with his sister Clemence to study art at the Lambeth School of Art and the Royal College of Art in London.

A staunch socialist and pacifist, in 1907 Laurence founded the Men's League for Women's suffrage with Henry Nevinson and Henry Brailsford.   In 1909 Laurence and his sister Clemence founded the Suffrage Atelier - an arts and crafts society that worked closely with the Women's Social and Political Union and Women's Freedom League. They encouraged non-professional artists to submit work and paid them a small percentage of the profits. The “Anti-Suffrage Alphabet”, written by Laurence Housman and edited by Leonora Tyson, was published in London In 1911.

With regard to his art work, Laurence illustrated George Meredith's Jump to Glory Jane (1892), Jonas Lie's Weird Tales (1892), Christina Rossetti's Goblin Market (1893), Jane Barlow's The End of Elfintown (1894) and his sister's novella The Were-Wolf (1896). He also wrote and published several volumes of poetry and a number of hymns and carols.

We fought at Armageddon for the freedom of the world !

By the master-hands which held us, eastward and westward hurled,

We were shattered, we fell down, for the place and time were fixed.

Tell me, O Brother Bone, what here remains to know :

Marched we as comrades then, or foemen, ere we died ?

Was it my hand or yours which dealt the murderous blow?

Was it your hand or mine which turned the blow aside ?

Took I my brother's life : what better life was mine ?

Fought I for freedom ; — of freedom so bereft ?

Had I the clearer sight to read the Heavenly sign?

Had I the cleaner heart, to keep my hands from theft ?

We fought at Armageddon for the freedom of mankind.

And while we fought, behind us freedom was bought and sold !

The light that lit these sockets is out, and we are blind.

Now with blind eyes we read ; now with dead hands can hold.

Bone to my bone you lie, companion of my pains !

What link of life is this, which binds us wrist to wrist ?

These, brother, these are not links but only chains,

Worn by the living, that the dying lips have kissed.

Millions we marched ; and the rattle of the drums

Drowned the rattle of our chains, and the shouting held our ranks.

For sweet to our ears was "The conquering hero comes,"

And sweet to our hearts " A grateful Country's thanks."

We fought at Armageddon for the brotherhood of Man ;

And safe within their fences the tricksters plied their trade.

'Twas the old fight we fought ; and it ends as it began :

The gamblers held their hands till the Last Trump was played.

We fought at Armageddon for the freedom of mankind :

The flesh is stript from off us, the chains remain behind,

And the Freedom that we fought for is an unremembered tune.