Catherine W. Reilly's wonderful 'Bibliography of English Poetry of the First World War' lists thousands of poets and their work. Among them is this entry on page 110:

"G. de St. Ouen 'Lest we forget': a note addressed to H.I.M. Wilhelm II, Emperor of Germany, on behalf of the British volunteers from the republic of the River Plate, Bueonos Aires. Published by British Printery in 1916."

Unfortunately, I cannot find a mention of G. de St. Ouen or of the British Volunteers from the Republic of the River Plate.  If anyone has any information, please get in touch.

Reilly, Catherine W. ' English Poetry of the First World War A Bibliography'  (St. Martin's Press, New York, 1978) - presumably published to mark the 60th anniversary of the end of WW1.
Posted by Lucy at 11:17 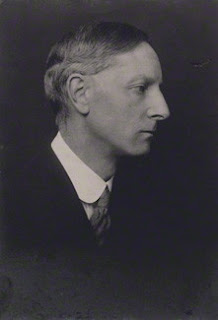 
Henry practised law from 1889 until 1899.   In 1889, Henry married Margaret Edina Duckworth of the Duckworth publishing family.  The couple had a son and a daughter.
The Newbolt family lived in Netherhampton, near Salisbury, Wiltshire, U, where Henry was a Churchwarden.


When the First World War broke out, Henry, along with other notable literary figures of the time, was invited to join the British War Propaganda Bureau.  Knighted in 1915, Henry later became Controller of Wireless and Cables (i.e.’Telecommunications’)   at the Foreign Office.  He was also Chairman of the Departmental Committee on the Distribution of Books Abroad.


Sir Henry Newbolt’s WW1 poems include ‘The War Films’ about the news film shown to the public about the early days of the Battle of the Somme, which was published in ‘The Times’ newspaper on 14th October 1916.   Newbolt’s WW1 collections include:


‘A Perpetual Memory, and other poems’, published by Murray, 1939

Sir Henry Newbolt’s most famous patriotic poems are ‘Drake’s Drum’ and ‘Vitaï Lampada’ or the torch of life, the latter being about the Battle of Abu Klea in The Sudan in January 1885.

THERE'S a breathless hush in the Close to-night -


Ten to make and the match to win -


A bumping pitch and a blinding light,


An hour to play and the last man in.


And it's not for the sake of a ribboned coat,


Or the selfish hope of a season's fame,


But his Captain's hand on his shoulder smote

The sand of the desert is sodden red, -


Red with the wreck of a square that broke; -


The Gatling's jammed and the colonel dead,


And the regiment blind with dust and smoke.


The river of death has brimmed his banks,


And England's far, and Honour a name,


But the voice of schoolboy rallies the ranks,

This is the word that year by year


While in her place the School is set


Every one of her sons must hear,


And none that hears it dare forget.


This they all with a joyful mind


And falling fling to the host behind -


Born in the town of Mere in Wiltshire, UK in September 1890, Colin was the youngest of eight children – six boys and two girls.  His father, John Thomas Mitchell was a farmer and his mother was Emma Jane Mitchell, nee Parsons.


Colin was educated at Shaftesbury Grammar School as a boarder school.  While there, he won a prize for English Literature.  He was interested in amateur dramatics and music and on leaving school became a bank clerk.


Colin joined the 8th Battalion of the Rifle Brigade during the First World War and was killed in action on 22nd March 1918.  At the time of his death he was a Sergeant.  Colin is commemorated on the Pozieres Memorial in Ovillers-la-Boiselle, France and in Mere Cemetery in Wiltshire.


Colin’s poetry collection was entitled ‘Trampled Clay’ and was published in 1917 by Erskine Macdonald, London.


He also had a poem included in ‘The Malory Verse Book’ edited by Editha Jenkinson and published by Erskine Macdonald in 1919.


‘Twas there we faced the flames of liquid fire.


Hooge! That shambles where the flames swept ruddy:


A spume of heat and hate and omens dire;


A vision of a concrete hell from whence


Emerged satanic forms, or so it seemed


To us who, helpless, saw them hasten hence.


Scarce understood we if we waked or dreamed.

“Stand To! Stand To! The Wurtembergers come!”


And boastful threats to kill they voice, while some,


In uniforms of grey and scarlet dressed,


Wear flame-projectors strapped upon their backs.


How face a wall of flame? Impossible!


“Back, boys! Give way a little; take the tracks


That lead to yonder wood, and there we’ll fill


Such trenches as are dug, and face the foe,


And no Hell-fire shall move us once we’re there.


Back and yet back, leaving good strongholds bare,


We’ll save our lives, perhaps, but not our name.


There’s no one in this well-trained company 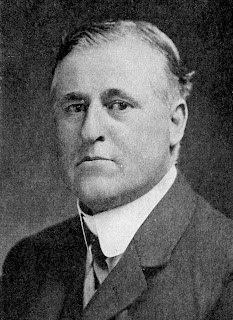 Watson was born in Burley-in Wharfdale in Yorkshire on 2nd August 1858.


He was a talented and popular poet who contributed to 'The Yellow Book' a publication featuring poetry, art and prose during the late 1800s.  However, possibly because of his criticism of the Boer Wars, Watson was not chosen as Poet Laureate.  He was married to Adeline Maureen nee Pring and the couple had two daughters.
During the First World War Watson's very patriotic poems earned him  a knighthood in 1917. Largely forgotten after the War, Watson died on 13th August 1935.


Watson’s collections of WW1 poetry were:
'A Hundred Poems' (Hodder and Stoughton, London, 1921) 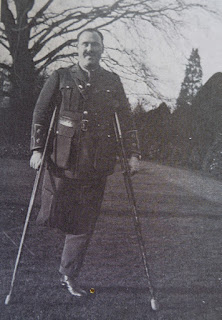 Sivori Antonio Joachim Levey was born in Steyning, Sussex, UK in 1879.  His parents were Richard Levey and his wife Emma, nee Raymond.


In the early 1900s the family lived in Oxford and Cambridge Mansions in Marylebone, London and Sivori was apparently a Civil Servant.   Sivori’s elder sister Adeline was a singer.
Sivori was an accomplished pianist.  He composed music and wrote lyrics as well as poetry. He was also an expert on Shakespeare’s plays and wrote books about how they should be presented.   With his sister Adele, Sivori entertained at concert parties and the pair seem to have toured with these groups.


In 1913, Sivori and his sister Adele gave a concert of music and recitations of poetry and stories at the Arts and Dramatic Club.  On 14th April 1914, Sivori and Adele with their friend and fellow entertainer, Maie Hoey, who made the masks Sivori used for his performances of some of Shakespeare’s speeches, inaugurated The Browning Theatre, Chenies Street, Tottenham Court Road, London with performances of some of Robert Browning’s best known works.
In 1915 Sivori was teaching elocution at the Berkshire Training College of Music in Reading.  He was Entertainments Secretary of The Concert Artistes’ Benevolent Association, a member of the London Shakespeare League and The Acting Circle.  Much of Sivori’s work, including sheet music, was published by The Fountain Publishing Company.

In the ‘Daily Herald’ newspaper of Saturday, 20th February 1915,  Langdon Everard wrote a rather scathing review of the eighth collection of Sivori’s verses entitled ‘The Little Blue Flower’ which contained a patriotic poem called ‘Britishers’.

Although he was not in the Army at the time of that review, Sivori joined the 13th West Yorkshire Regiment and was commissioned as a Lieutenant.   He was on the Western Front by August 1916, when Adele was busy touring Britain entertaining wounded Tommies.  These performances were usually followed by an invitation to the soldiers to to take tea with her and Adele soon became known as ‘The ‘Mummie’ of 50,000 Boys’.

Sivori composed and wrote the lyrics for a song called ‘The Duck Board Glide’ after being blown into a shell hole by a Toc Emma at Ypres.  Sivori took a gramophone to the Front to entertain his fellow Tommies and performed this at many Regimental concerts. Lena Ashwell’s concert parties also included the song in their concerts in France and Flanders during the First World War.


Sivori was wounded at Passchendaele and lost a leg.  While recuperating at hospital in Fowey, Sivori wrote and published a collection of poems ‘Flanders to Fowey’ (‘Ypres and Apres’) Verses of Active Service, Hospital and Convalescence by a Wounded Warrior’ which were published by the Sivori Levey Publications, 1917.
After the war Sivori continued to entertain people at concert parties.  He died in Wandsworth in 1924.

You can read one of Sivori's poems here:


Photo of Levey at Fowey:


Sources:  The British Newspaper Archive, Find my Past and
http://spitalfieldslife.com/2015/01/23/east-end-entertainers-of-1922/

I am particularly interested in R.E. Vernede because he was one of the poets who was killed on the Western Front on the same day as my Great Uncle James Yule. 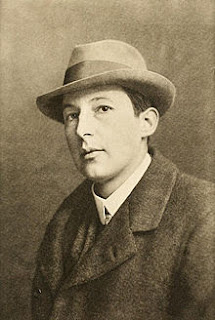 Robert Ernest Vernède was born on 4th June 1875 in Kensington, London. His parents were Oscar Vernède, a solicitor, and his wife Annie nee McEwen. The Vernède family were originally Huguenots who had fled France in 1685 after the Edict of Nantes. Robert’s Grandfather, Henri Vernède, became a British citizen when he married an Englishwoman.
R.E. Vernède was educated at St. Paul’s School, where he demonstrated his prowess in writing poetry by winning a prize and where one of his fellow pupils was G.K. Chesterton, another Forgotten Poet of the First World War.  Vernède went on to study classics at St. John’s College, Oxford.  Tall, with dark hair and an olive complexion, he was a strong swimmer, an accomplished ice-skater and a keen tennis player. After Oxford, Vernède began a career as a writer.
In 1902, Vernède married Caroline Howard Fry and the pair travelled extensively before settling down in Standon in Hertfordshire.
Vernède volunteered at the outbreak of the First World War, initially enlisting as a Private in the 19th Royal Fusiliers, a Public Schools Battalion, in 1914.  He was commissioned as a 2nd Lieutenant in the Rifle Brigade in 1915.    In January 1916, Vernède was sent to the Western Front where he served on The Somme until he was wounded in the thigh in September 1916.
After a period of recuperation in England, Vernède refused to allow a friend try to find him a desk job and rejoined his Battalion in France in December 1916.   He was mortally wounded leading an attack on Havrincourt Wood near Arras on Easter Monday, 9th April 1917.
Vernède’s first poem written about and during the First World War was published in ‘The Times’ on 7th August 1914.  His war poems were published as a collection after his death as ‘War Poems and Other Verses’ (with an introduction by Forgotten WW1 Poet Sir Edmund Gosse) and his poems were included in 22 anthologies of First World War poetry.

Vernede's letters to his wife Caroline were published after his death by Collins & Co. of London in autumn 1917.