A very interesting commemorative project: "The Bridge: Reading the Poetry of War"

With thanks to Deb Fisher of the Siegfried Sassoon Association and to Patrick Villa of the War Poets Association for finding this interesting project organised by Eric M. Murphy and Linda A. Saunders.  Further details about The Bridge Reading the Poetry of War can be found on their website:   https://thestrategybridge.org/the-bridge/2017/9/8/reading-the-poetry-of-war

The organisers are hoping for the in-put of as many people as possible so do have a look and see if your own favourite poem has been added and if not please add it.

John Arnold Nicklin was born in Llanfair Caerncinion in Montgomeryshire, Wales, UK in 1871.  His parents were Thomas Nicklin, a farmer from Glamorgan, Wales and his wife Hannah Nicklin, nee Fenn, from Shropshire.  John had the following siblings:  Thomas, b. 1869 and Hannah Constance, b. 1870.  The children’s father died on 8th September 1873.


Educated at Shrewsbury School before going up to St. John’s College, Cambridge to study Classics, John became a teacher and was Assistant Master at Liverpool College from 1896 – 1901 when the family lived in Toxteth on Merseyside.  He wrote for “The Daily Chronicle” and “The Tribune” newspapers.


In 1903, John married Maria Louisa Petrie in London and they went to live in Lambeth, where John died on 16th April 1917.


John’s WW1 collection “And they went to the war: poems” was published by Sidgwick & Jackson, London in October 1914.


Find my Past and Free BMD websites.

From “Whitechapel” by John Arnold Nicklin (describing a volunteer)

A white and wolfish face, with fangs
Half-snarling out of flaccid lips:
Ann unkempt head that loosely hangs;
Shoulders that cower from gaoler’s grips;


Eyes furtive in their greedy glance;
Slim fingers not untaught to thieve; -
He shambles forward to the chance
His whole life’s squalor to retrieve.

It always surprises me when I research the forgotten poets of the First World War when I discover someone like writer and poet Stephen Southwold who was a very prolific writer but is now almost completely forgotten.   He has a brief mention in Catherine W. Reilly's "English Poetry of the First World War: A Bibliography" (St. Martin's Press, New York, 1978) on page 300, giving the title of his WW1 collection and the fact that Reilly found a copy in the British Museum.  Fortunately, Stephen's grandson, Andrew, is working hard to ensure that Stephen's work is given more attention.


Stephen was born Stephen Henry Critten on 22nd February 1887 in Southwold, Suffolk.  His parents were George Miller Critten, an insurance agent, and his wife Emma Critten, nee Lambert.  The family lived in Suffolk but in 1911 were registered as living in West Ham, London.   Stephen’s siblings were Dorothea, b. 1880, Katherine or Catherine, b. 1882 and Percy, b. 1885.  Like Stephen, his siblings became school teachers.


Stephen studied to become a school teacher at St. Mark’s Training College in Chelsea, London.  He then worked as a teacher at Earlsmead Council School in Tottenham from 1907 until 1913 and at Culvert Road Council School from 1913 until 1927, with a break for military service.


Stephen joined the Royal Army Medical Corps as a Private and served on the Western Front from 1914 until 1919.   Many of his WW1 poems were written in France in 1918.


His WW1 poetry collection “The Common Day: Poems” was published by Allen & Unwin in 1915.


For further information about Stephen and to read some of his poems, please see Andrew Southwold’s Facebook page dedicated to his grandfather https://www.facebook.com/StephenSouthwold/
Posted by Lucy at 03:11 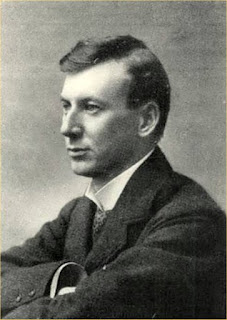 Edward Verrall Lucas, a Quaker poet, writer, journalist and publisher, was born in Eltham, Kent in 1868.  He was the second of four sons and three daughters born to Alfred Lucas and his wife Jane, nee Drewett.


Edward was educated at The Friends’ School in Saffron Walden. After leaving school Edward worked in a bookshop in Brighton before becoming a journalist for a Brighton newspaper.  He then went to London to work on an evening paper.


In 1897, Edward married Florence Elizabeth Griffin, whose father was American, and the couple had a daughter, Audrey.


In 1904, Edward began working for “Punch” magazine and became assistant editor.  He worked there for 34 years and in 1924 he also became Chairman of the publishers Methuen.


Edward became a close friend of J.M. Barrie and joined Barrie’s recreational cricket team.  Barrie’s cricket team played their final match on 28th July 1913 against E.V. Lucas’s XI at Downe House School, which was at that time housed in Kent in a property that had belonged to Charles Darwin. E.V.’s daughter Audrey Lucas, was a pupil at Downe House School at that time.


During the First World War, E.V. Lucas worked as a Secretary for the British Red Cross in Italy.  His WW1 poetry collections were:  “The Debt” (Methuen, 1914; “Guillaumism: two aspects (Clement Shorter, 1914); “Swollen-headed William: painful stories and funny pictures after the German” (Methuen, 1914); and his poems were published in four WW1 poetry anthologies.


Soon after the end of the war Edward and Elizabeth separated and Edward died in a nursing home in Marylebone, London at the age of seventy.