John Still was born in Lambeth in 1880. His father, also called John Still, was an Anglican priest and his mother was Anna Elizabeth Still, nee Nutrill.  Educated at Winchester College, Still went to Ceylon (as Sri Lanka was then called) as a tea planter in 1879.   John married Winifred Mary Evans.
He served as a 2nd Lieutenant in the East Yorkshire Regiment during the First World War and was taken prisoner of war during the Gallipoli Campaign.

In the Foreword to his First World War poetry collection “Poems in Captivity”, which he dedicated to his wife, John explains how he came to write poetry during the three years he spent in captivity in Turkey:
“… each one of us was driven to seek inside himself some alleviation of the daily dullness, many of us there found things we had not suspected to exist. For, to find distraction, we were thrown back more upon our own creative powers, and were helped less by our surroundings than ever is the case in normal life.


Some found the wit to write plays, and others the talent to play them. Some discovered the power to draw ; and one at least found much music in his mental storehouse. Some developed into expert carpenters, and others, less profitably, into hardly less expert splitters of hairs ! Some found in others a depth of kindness more durable I think than the depths of hate this war has generated. I found these verses …”


John Still’s poem “Christmas Day” is on page 66 of the collection:

YEARS ago. Years ago.
Three years ago on Christmas day,
Out in a forest far away,
The monkeys watched me down below,
And saw me hide in the waving grass
While the elephant herd went trampling past.
Oh, the great wild herd that Christmas day !
And I as wild and free as they,
As free as the winds that blow.


Christmas day. Christmas day.
Across the yard with footsteps slow
The sentries pace the mud below ;
The wind is cold, the sky is grey ;
Christmas day in a prison camp,
With freedom dead as a burnt-out lamp.
The lions eat and the lions rage,
Three steps and a turn in a narrow cage,
And I am as free as they.

Rich and poor. Rich and poor.
Poor as a sparrow or rich as a king,
This world can offer but one good thing,
And my heart is sick to be free once more.
For the sun may shine in a sapphire sky,
But give me freedom or let me die :
Free and fresh is the forest breeze
Whose spirit rides on the tossing trees,
And the waves break free on the shore.


“Poems in Captivity” was published by John Lane, The Bodley Head, London in 1919.  This is now available on Archive as a free down-load https://archive.org/stream/poemsincaptivity00stiliala#page/n7/mode/2up


John Still also wrote “A prisoner in Turkey” which was also published by The Bodley Head, as well as a book about his life in Ceylon and "Jungle Tide" about his discoveries in Ceylon.

With thanks to someone called 'In the Know' who kindly pointed out to me that Hilary Douglas Clark Pepler is not a female but a male poet.  The name of course in English can be either masculine or feminine - I have a cousin Hilary, a cousin Elliott both female and a neighbour called Cameron who, unlike Cameron Diaz, is male.

Harry Douglas Clark Pepler was born in Eastbourne. During WW1 he worked for London County Council. 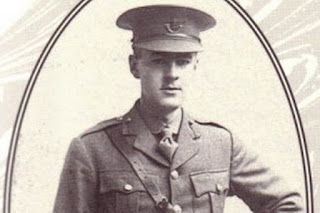