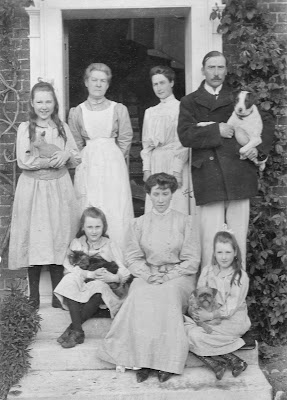 Edward Harold Begbie was the fifth son of Mars Hamilton Begbie and his wife Anna Eliza. Harold's father was an Anglican Church priets and Rector of the Parish Church of Farnham St. Martin in Suffolk.  Although he first became a farmer, Harold later moved to London where he joined 'The Daily Chronicle' newspaper and later 'The Globe' newspaper as a journalist.


In 1892, Harold married Alice Gertrude Seal and they had four daughters, Janet, who was also a poet, Joan, Eve and Eleanor. During the First World War, Harold wrote recruiting poems and travelled to America to try to help the war effort on behalf of his newspaper.

With thanks to Roger Quin, Harold's grandson, for information and for the photograph of the Begbie family.


This is the WW1 poem I first read at the age of seven.  It was handwritten in my Aunt's little black book commemorating the First World War. Sadly, her book went astray during a house move some years ago. I have been searching for the poem ever since.  Aunt Audrey was in the Wrens during WW2. She emigrated to South Africa after the war and died there.  She left her notebook and a photo album with my Mother. I read both avidly.   The poem always made me cry.  I can honestly say that is where my interest in WW1 poetry came from.


Soldier what are you writing
By the side of your cooling gun?
Sir, since Im stopped from fightings
A word to my little son.


Tell me the thing you've written
For I love the writer's art:
Sir, that to be a Briton
Is worth a broken heart.


Show me so fine a letter
That you write in the trenches mud:
Sir, you could read it better
Were it not for the stain of blood.


Soldier tell me your story
Your eyes grow bright and wide:
Sir, it's a taste of glory
To think of the young one's pride.


Would I like to be with Tommy, little Tommy-all-my-own,
Would I give a month of Sundays just to see how he has grown?
Yes ! Id like to be a dustman in the poorest London streets
For the chance of meeting Tommy with a gumboil made of sweets.


If you want to be where I am, why, I want to be with you.
But I'm here to show a tyrant that a Briton's word is true
We must stand by little Belgium, we must fight till fighting ends.
We must show the foes of Britain that we don't desert our friends.


Don't you go and think, my Tommy, little Tommy-all-my-own.
That we're squabbling here for nothing, that we're growling for a bone:
We are here for Britain's honour, for our freedom, for our peace.
And we're also here, my Tommy, that these wicked wars may cease.


But it's after, looking round us, missing friends and finding dead.
It is then the British soldier gets a fancy in his head.
And he swears by God in heaven that the man who starts a war.
Should go swimming into judgment down an avalanche of gore.


That's what makes us such great fighters, and I'd have you be the same,
Love your country like a good un, hold your head up, play the game,
Be a straight and pleasant neighbour, be a cool, un-ruffled man.
But when bullies want a thrashing, why, you thrash them all you can.


While you say your prayers, my Tommy, little Tommy-all-my-own,
Asking God to save your Daddy, I send this one to His throne:
Save my little lad from slaughter, guard his heart and mind from wrong,
Keep him sweet and kind and gentle, yes, but make him awful strong.


Good-night, my little Tommy, here's your Daddy's good-bye kiss.
Don't forget what I have told you, and remember also this —
If I don't come back to see you, I shall die without a groan,
For it's great to fall for Freedom, little Tommy-all- my-own.


With grateful thanks to Janet Begbie's Great-nephew Roger Quin for his help with information about the Begbie family and for kindly allowing reproduction of this photograph.