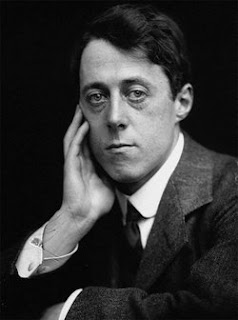 Robert Laurence Binyon was born on 10th August 1869 in Lancaster.   Laurence was the son of Frederick Binyon and his wife Mary, nee Dockray.

A pupil of St. Paul's School in London, Laurence went on to study classics at Oxford University, joining Trinity College.  He began work at the Department of Printed Books of the British Museum.

In 1904, Laurence married Cicely Margaret Powell, a historian and they had three daughters.

Laurence was friends with fellow poets Ezra Pound, Richard Aldington and Hilda Dolittle (known as H.D.).
His most famous poem is "For the Fallen" which was written sitting on a cliff top in Cornwall after the Battles of Mons and The Marne had caused terrible casualties on the Western Front.  He volunteered for war work in spite of being too old and became a hospital worker in Arc-en-Ballois, France.

Sir Edward Elgar set three of Laurence's poems to music and published these as "The Spirit of England" in 1917. 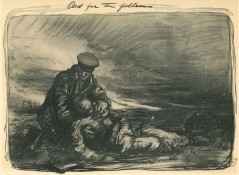 After a long and distinguished career, Laurence retired from the British Museum in 1933 and retired to Streatley in Berkshire.  He was appointed Norton Professor of Poetry at Harvard in 1933 and Byron Professor of English Literature in Athens University, leaving just prior to the German invasion of Greece in 1941.

Laurence Binyon's WW1 anthology "The Winnowing Fan  Poems on The Great War" was published in 1914 by Houghton Mifflin Company, New York and Boston

Laurence Binyon's most famous work is "For the Fallen" which is quoted regularly at commemorative events when the lines from the fourth verse - "At the going down of the sun and in the morning we will remember them" and "They shall not grow old, as we grow old: Age shall not weary them or the years condemn" are repeated.

Sir Thomas Brock RA "Aid for the Fallen" from King Albert's Book, published in 1914 in aid of the Daily Telegraph Fund for Belgium.
Posted by Lucy at 10:15