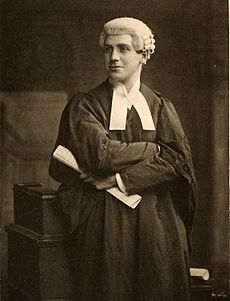 Thomas Michael Kettle was born in Artane in Dublin.  His father was Andrew J. Kettle, a farmer and his mother was Margaret, nee McCourt.   Tom was educated at the Christian Brothers O'Connell School in Dublin, Clongowes Wood College in County Kildare and University College Dublin.   In 1900 he travelled in Europe, where he studied French and German.   An advocate of home rule for Ireland, Tom qualified as a barrister in 1905.  In 1906 he was elected as the MP for East Tyrone.

At University, Tom met Mary Sheehy and the couple were married in September 1909.  Their daughter, Elizabeth, was born in 1913.

In 1914, Tom was in Belgium at the outbreak of war and wrote articles about what he witnessed for 'The Daily News'.   When Ireland entered the war on the side of the Allies, Tom joined the Royal Dublin Fusiliers and applied to be sent to the Western Front.  He was killed on 9th September 1916, leading his men at Guinchy in the Battle of the Somme, France.   He has no known grave.

In his book "Walking like a Queen  Irish Impressions" G.K. Chesterton referred to Tom as a scholar, a wit and an orator and ambitious in the arts of peace.

To my Daughter Betty

In wiser days, my darling rosebud, blown
To beauty proud as was your Mother's prime.
In that desired, delayed, incredible time,
You'll ask why I abandoned you, my own,
And the dear heart that was your baby throne,
To dice with death.  And oh! they'll give you rhyme
And reason:  some will call the thing sublime,
And some decry it in a knowing tone.
So here, while the mad
guns curse overhead,
And tired men sigh with mud for couch and floor,
Know that we fools, now with the foolish dead,
Died not for flag, nor King, nor Emperor,
But for a dream, born in a herdsman's shed,
And for the secret Scripture of the poor.

Tom wrote the poem four days before he was killed.

From "The War Poets  An Anthology" published for The Great Writers Library, by Marshall Cavendish Partworks Ltd, London, 1988
Posted by Lucy at 09:10