In my search for information about Oliphant this morning, I contacted St. Mary's Church in Gillingham, Dorset.  I received an immediate, lengthy and detailed reply from Carol Blackmore the Parish Adminstrator, which enabled me to add something to my previous piece about the poet.  I am also able to add the photograph of the memorial to Oliphant which is on the Bell Tower at St. Mary's Church.  Many thanks to Carol. 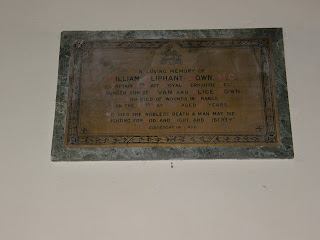 Oliphant was born in 1885 in Bridgwater, Somerset and was christened William Oliphant Down.  His parents were Evan Roberts Down and his wife Sarah Alice, nee Boswall.  Oliphant was their youngest child and younger son – his siblings were Edwin Boswall Down b. 1880, Elizabeth Lockyer Down b. 1881, and Ethel Margaret Down, b.1883.  Oliphant’s father was initially an architect but then ran a bacon curing firm in Gillingham, where the family moved when Oliphant was five years old.


Oliphant was educated at Gillingham Grammar School before going on to Warminster Grammar School where he was a boarder. After working in London as an accountant and then a journalist, Oliphant became an actor, poet and playwright - "The Maker of Dreams" being his most famous work.


At the outbreak of war in 1914, Oliphant enlisted in the 15th Hussars.  He was commissioned into the 4th Battalion of the Princess Charlotte of Wales's (Royal Berkshire) Regiment on 6th September 1915 as a 2nd Lieutenant.


Awarded the Military Cross in 1915 'for conspicuous gallantry in action', Oliphant was killed in action on 25th May 1917 at Demicourt, Somme.  At the time of his death, he was a Captain.


Oliphant Down’s poems were published under the title "Poems" by Gowans and Gray Ltd, London in 1921.


Oliphant is remembered in a plaque on the Bell Tower of St. Mary’s Church in Gillingham, Dorset and was buried in Hermies Hill British Cemetery, Pas de Calais in France.


A whisper wandered around
Of a plan of the G.O.C’s
And figures surveyed the ground
In stealthy groups of threes;
But the whole brigade was there
Or pretty well all the lot,
When we dug a trench at Never-mind-where
On April the Never-mind-what.


The Whats-a-names dug the trench,
The Who-is-its found the screen,
And we mustn’t forget to mench
The Thingummies in between;
The Tothermies built the fence
And the R.E.’s also ran;
For we didn’t spare any expense
With labour a shilling a man.

There isn’t much else to tell,
Though the enemy made a song
And tried to blow it to Hell,
But got the address all wrong,
For you’ll find it is still out there
In the bally old selfsame spot!
That trench which we dug at Never-mind-where

One of the plays that Oliphant wrote while on the Western Front in WW1 was entitled "Tommy-by-the-Way".  The play was performed in London in 1918 at a charity event and "The Times"  newspaper reviewed it:


"It deals with a "fed-up Tommy" on a sunken road "somewhere in France," distraught by the overpowering effects of shell fire and about to seek relief in a self-inflicted "blighty." From this coward's act he is saved by the "Spirit of the Women of England," who appears to remind him of the glorious deeds performed by him and his comrades in the past. The curtain falls as the soldier, roused once more to a sense of duty, marches off to play his part in the "great push" which is about to begin. Powerfully played by Mr. George Tully and MIss Lilian Braithwaite, the play lays strong hold of the imagination and gives a poignant insight into the tragedies of war.