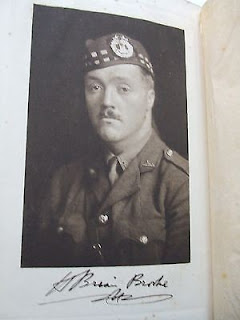 Henry Brian Brooke was born on 9th December 1889 at Lickleyhead Castle, Aberdeenshire, the third son of Captain Sir Harry Vesey Brooke and his wife Patricia, nee Moir-Byers.   Brian’s siblings were James Anson Otho Brooke (1889 - 1914), Constance Geraldine Brooke (1889 - 1973) Patrick Harry Brooke (1895 - 1917) and Rupert Brooke who was born and died in 1896.  As a child, Brian liked to draw and write poetry.  He attended Clifton College and then went to Gordon's College in Aberdeen to prepare for life as a colonial civil servant.  According to M.P. Willcocks who wrote the introduction to Brian's poetry collection, he had red hair and grew to a height of 6 foot 3 inches.


Brian’s eyesight was poor so instead of joining the Army or Navy like his brothers, he went to British East Africa, where he was a big game hunter and cattle farmer who befriended the local Masai tribe and became their blood brother.   He wrote poetry using the pen-name “Korengo”, which means “the big man” in Masai.  He was wounded in Jubaland, Somalia while serving with the East African Transport Corps losing two fingers, and returned to Britain for treatment.


When his brother James was killed in Belgium on 29th October 1914 (he was posthumously awarded the V.C.), Brian joined the 2nd Battalion of the Gordon Highlanders.   He was sent to the Western Front.  During the Battle of the Somme at Mametz Wood on 1st July 1916 Brian was wounded three times, first in the leg, then in the arm and finally in the neck but he continued to lead his men until he could go no further. 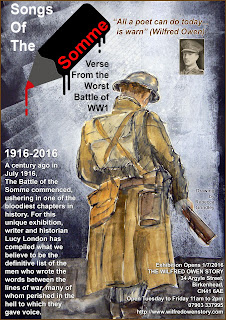 Brian was sent home to Britain after initial treatment at the Base Hospital and was transferred to the Empire in London where he died of his wounds on 24th July 1916.  Brian is buried in Aberdeen Springbank Cemetery.  Brian’s brother Patrick was in the Royal Navy, serving on HMS “Courageous” and died of Typhoid Fever on 24th May 1917.


Brian Brooke’s collection of WW1 and other “Poems” was published by John Lane, The Bodley Head, London in 1917.

Brian Brooke is one of the forgotten poets of WW1 featured in the Exhibition of Somme Poets at The Wilfred Owen Story Museum in Argyle Street, Birkenhead, Wirral, CH41 6AE.
The Museum is open Tuesdays - Fridays from 11 am - 2 pm but you can phone if you are planning a visit to ensure there will be some to meet you and show you round.07903 337995.