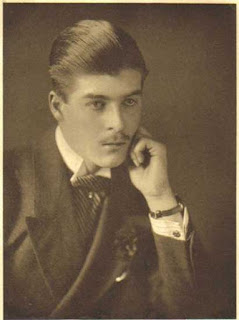 The Hon. Edward Wyndham Tennant (known to his family as 'Bim') was born on 1st July 1897 in Stockton House, near Warminster, Wiltshire, UK.  His father was Edward Priaux Tennant, Liberal Member of Parliament for Salisbury from 1906 (created Lord Glenconner in 1911) and his mother was Pamela Tennant, daughter of the Hon Percy Scawen Wyndham. His aunt, his father’s sister, was Margot Asquith, second wife of the Prime Minister, Herbert Asquith, father of Raymond Asquith.  Edward's younger brothers were Stephen Tennant, and David Tennant, the founder of the Gargoyle Club.
Educated initially at West Downs School in Winchester, Edward began writing poetry at an early age.  He went on to study at Winchester College school and had planned a career in the British Diplomatic Service but instead joined the Grenadier Guards when WW1 broke out.

Edward was killed a week after his friend Raymond Asquith by a German sniper on 22nd September 1916.  He was buried in Guillemont Road Communal Cemetery near Raymond Asquith.

Edward's WW1 poems were published under the title "Worple Flit and other poems" in 1916.

After her son's death, Pamela Adelaide Genevieve Tennant, nee Wyndham, who was also a writer, published "Edward Tennant: a memoir" which is available to read free of charge on www.archive.org

The powers that be in solemn conclave sate
And dealt out honour from a large tureen,
And those unhonour’d said ’twas rather flat,
Not half so sparkling as it should have been.
Those honour’d silently pass’d round the hat,
Then let themselves be freely heard and seen.

And all this time there were a lot of men
Who were in France and couldn’t get away
To be awarded honours. Now and then
They died, so others came and had to stay
Till they died too, and every field and fen
Was heavy with the dead from day to day.

But there were other men who didn’t die
Although they were in France – these sat in cars,
And whizzed about with red-band caps, awry,
Exuding brandy and the best cigars.
With bands and tabs of red, they could defy
The many missiles of explosive Mars.

But one there was who used to serve in bars
And for his pretty wit much fame had god:
Though really not so fit to serve in wars,
They made him a staff-colonel on the spot,
And threw a knighthood in as well, because
He really had done such an awful lot.

Up fluttered eyebrows (incomes fluttered down)
His erstwhile yeomanry stood all aghast,
This Juggernaut, devourer of renown,
Was he their fellow-mug in days long past?
In France he went by train from town to town,
Men thought his zenith had been reached at last.

To this the Powers That Be replied, “Oh no!”
And they discovered (else my mem’ry fails)
That he had gone by train some months ago
From Paris with dispatches to Marseilles!
“See here,” they cried, “a well-earned D.S.O.
Because you did not drop them ‘neath the rails.”

So now from spur to plume he is a star,
Of all an Englishman should strive to be,
His one-time patrons hail him from afar
As “Peerless warrior,” “battle-scarred K.G.”
And murmur as he passes in his car,
“For this and thy mercies, glory be!”

But all this time the war goes on the same,
And good men go, we lose our friends and kith,
The men who sing knee-deep in boosted fame
Prove that “rewarded courage” is a myth:
I could sum up by mentioning a name:
A pseudonym will do, we’ll call him Smith.