Exhibition of Poetry Written by Schoolchildren in WW1 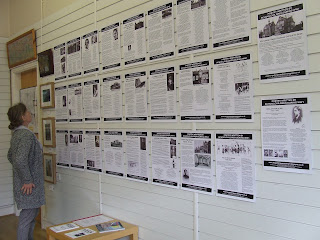 The latest in a series of commemorative exhibitions about the poetry of The First World War to go on display at The Wilfred Owen Story in Argyle Street, Birkenhead, Wirral, features poetry written by schoolchildren during the conflict.  The exhibition was opened on Saturday, 17th March 2018.  At the same time, a bust of Wilfred Owen sculpted by Anthony Padgett was unveiled.  Poets featured include the girl who went on to use the pen-name Temple Lane, the boy who went on to use the pen-name George Orwell, the girl whose husband founded the publishing company Faber & Faber, Alec Waugh, brother of Evelyn, J.R. Ackerley and a boy who went on to become Aide-de-Camp to Queen Elizabeth.

The Wilfred Owen Story was devised and opened in 2010 by Merseyside singer-songwriter Dean Johnson, a former pupil of the Birkenhead Institute where Wilfred Owen was educated.


Entry to The Wilfred Owen Story is free and you will find the WOS at 34 Argyle Street, Birkenhead, Wirral, CH41 6AE.  The WOS is open Tuesdays to Fridays from 12 noon until 2 pm but it is advisable to telephone first - 07903 337995 as the WOS is run entirely by volunteers http://www.wilfredowenstory.com/

Photo taken by Janet Holmes of the WOS and The Rathbone Studio.
Posted by Lucy at 03:21