These poems have been suggested for us by AC Benus, author of “The Thousandth Regiment: A Translation of and Commentary on Hans Ehrenbaum-Degele’s War Poems” by AC Benus (AC Benus, San Francisco, 2020) includes original poems  ISBN: 978-1657220584

Robert Nichols – THE soldier poet during WW1 - features in an earlier post https://forgottenpoetsofww1.blogspot.com/2016/04/robert-nichols-1893-1944-british-writer.html

AC Benus says: “As early as 1918 Nichols felt it necessary to refute the critics' assertion that he was pro-war and that his work glorified the military. It's interesting to know that in English circles as soon as 1918 there was a concern that much of the published poetry of the War had been of the armchair variety and much too gungho. It's surprising to learn Nichols got swept up in such accusations, because as the 1915 poem "The Chink" shows, he voiced early and vivid horror with the war.

WEEPING, I listen and I wait,

Still gird the guns. But now a pause

And lo ! a chink of night withdraws

And strange and distant, thin and high,

I hear the lost and human cry.

The victors and victorious slain,

The vanquished and their dead again

Sing : ' We have slain a Foeman tall,

Death the dreadest Foe of all.

For bound with our own bloodied bands

One is given in our hands,

And the steel that slit our side

Has his red hands crucified,

We have made a gain of loss,

Giant War hangs on his cross.

Nothing fair has man assayed

But by loss his gain was made.

Giant War is dead, but still

Live more giants that do ill.

There must have been confusion (or critic-directed dilution) that some of the narrative poems I've read from him end on notes on praising the people willing to give their life for a cause without stating that the cause itself was not tied up into larger motivations of empire, etc. Anyway, Nichols can speak well for himself. See the Introduction here:

Before, before he was aware

And he could not stay his hand

From moving to the barbed wire's broken strand.

Night waned. He was alone. A heavy shell

His wound was wet to his hand : for still it bled

On to the glimmering ground.

Then with a slow, vain smile his wound he bound,

Home whose thought he put away.

Whispered: "Where's Mister Gates?" "Out on the wire."

Dawn blinked, and the fire

Of the Germans heaved up and down the line.

When we might get him in yet safe and whole!"

Meanwhile the Maxims toc-toc-tocked; their swish

Of bullets told death lurked against the wish.

No hope for him!

His corporal, as one shamed,

Vainly and helplessly his ill-luck blamed.

Then Gates slowly saw the morn

Break in a rosy peace through the lone thorn

By which he lay, and felt the dawn-wind pass

Whispering through the pallid, stalky grass

And the tears came

He closed his eyes : he thought of home

And grit his teeth. He knew no help could

The silent sun over the earth held sway,

Occasional rifles cracked and far away

A heedless speck, a 'plane, slid on alone,

" I must get back," said Gates aloud, and heaved

At his body. But it lay bereaved

And he lay still. Blood swam across his sight.

Then with a groan:

Gold-rimmed, blackened the sun and then was gone. . . .

The sun still smiled. The grass sang in its play.

Someone whistled : " Over the hills and far away."

'Urry up with that tea."

Timmins and Jones and Wilkinson (the ' bard '),

And Hughes and Simpson. It was hard

Not to see them: Wilkinson, stubby, grim,

Simpson: " Indeed, sir ?" (while it seemed he winked

And Corporal Timmins, straight and blonde and wise,

With his quiet-scanning, level, hazel eyes;

A dozen different sorts of eyes. O it

Was hard to lie there ! Yet he must. But no:

His head was hammering, and his eyes were dim;

A bloody sweat seemed to ooze out of him

Before another effort of his will

Took him one nearer yard.

The parapet was reached.

He could not rise to it. A lookout screeched:

Three figures in one breath

"Timmins and Jones." "Why did they that for me?

He twitched. They heard him moan

"Why for me?" His eyes roamed round, and none replied.

"I see it was alone I should have died."

They shook their heads. Then, "Is the doctor here?"

Lift me." They lifted him.

He smiled and held his arms out to the dim,

And in a moment passed beyond their ken,

Hearing him whisper, "O my men, my men!" 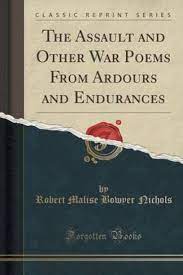