Can anyone help find the true writer of the WW1 poem 'The Red, Red Road to Hooge'? 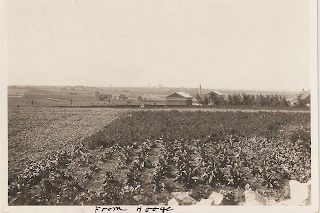 I wasn't sure whether this should come under the heading Fascinating Facts or Forgotten Poets of the First World War.   All help in solving this mystery will be greatly appreciated and I will, as always, credit those who help me.

Andrew Thornton, who runs the wonderful Facebook Group https://www.facebook.com/pages/The-British-Expeditionary-Force-on-the-Western-Front-1914-1918/377498902412962?pnref=story which is all
about the professional soldiers of the First World War - the 'Old Contemptibles' of which my Grandfather was one - has posted a very interesting poem.

"I came across this poem today while doing some research. I haven't seen it before, but thought you would like to read it:

THE RED, RED ROAD TO HOOGE.

“On parade – get your spade;
Fall in the “Shovel and Pick Brigade;”
There’s a “Carry Fatigue” for half a league,
And a trench to dig with a spade.
Through the dust and ruins of Ypres town,
The “Seventeen Inch” still battering down;
Spewing death with its fiery breath;
On the red, red road to Hooge.

Hark to the stand to fusillade.
Sling your rifle, bring your spade,
And fade away, ‘ere break of day,
Or a hole you’ll fill at Hooge.
Call the roll – and another name
Is sent to swell the Roll of Fame;
So we carve a cross to mark the loss
Of a chum who fell at Hooge.

Not a deed for the paper man to write,
No glorious charge in the dawning light;
The “Daily Mail” won’t tell the tale
Of the night work out at Hooge.
But our General knows, and his praise we’ve won,
He’s pleased with the work the Staffords have done,
In the shot and shell at the gates of hell,
On the red, red road to Hooge.”

The poem was also published in 'The Burton Daily Mail' on 6th December 1915. Based on what the lines mention, I would say the fighting during July and August 1915 were the inspiration.  The 6th Division  made the attack on 9th August 1915 and the 1st North Staffords and 2nd Sherwood Foresters, which both had soldiers who claimed to be the author, served at Hooge at that time. The crater mentioned in the poem was from a mine blown by the British in July.

Further research by Geoff Harrison has found other versions of the same poem.   73914 Private Jack O'Brien, who served with the 28th Battalion, Canadian Expeditionary Force, included it his in his book 'Into The Jaws of Death' (available on archive.org) substituting 'Canadians' for 'Staffords', while a Private W. Lloyd of the 12th Battalion, The Sherwood Foresters, and an unidentified soldier serving with "A" Company of the 2nd Battalion of the same Regiment, also claimed authorship.  In both those cases, rather than ' Onward the Staffords', the phrase 'Onwards the Sherwoods' was substituted.

A transport cook called Frances used 'Onward the Lancs' in his version printed in a parish newspaper from Dearnley, which is in south east Lancashire.

(The photograph of Hooge was taken in July 1929 (by someone from Spalding possibly) and shows the view at Hooge looking across toward Ypres, with the Cross of Sacrifice of Hooge Crater Cemetery clearly visible.)   Andrew Thornton, August 2015
Posted by Lucy at 23:49