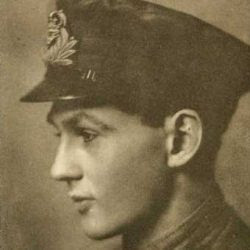 Miles was born on 1st December 1896 in St. Ives, which is now in Cambridgeshire, UK but was in the County of Huntingdonshire at the time of his birth. His parents were George Dennis Day, a solicitor and Town Clerk of St. Ives, and his wife Margaret Jane, nee Davis.  Miles had the following siblings:  George L., b. 1891, Dennis Ivor, b. 1892, and Gwladys M., b. 1895.  The family lived in a large house called Rheola in St. Ives.

Educated at Sandroyd School in Tollard Royal, Wiltshire and at Repton School in Derbyshire, Miles was due to go up to St. John’s College, Cambridge when war broke out.  He joined the Royal Naval Air Service and served as a Flight Commander.  Five victories in air battles, one captured enemy aircraft, two shared victories and two enemy planes disabled made Miles an Air Ace.

He was shot down flying a Sopwith Camel plant on 27th February 1918 while leading a patrol to attach six enemy seaplanes.  His DSC was awarded after his death.  Miles has no known grave but is commemorated on a memorial tablet at St. John’s College Cambridge, on Panel no. 30 of Chatham Naval Memorial and on the War Memorial in St. Ives, Cambridgeshire. 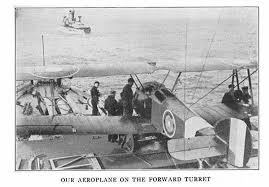 In 2015 a commemorative bench was placed in Broad Leas Cemetery, St. Ives in memory of Miles and his brother, Dennis Ivor, who initially served with the Royal Naval Division but was commissioned into the Royal Field Artillery and was wounded.in October 1915 at Vermelles during the Battle of Loos.  Dennis died on 7th October 1915.

George L. Day also served during the First World War, was wounded in 1918 but survived.  After the war, he joined the family’s law firm, served as Town Clerk for St. Ives and died in 1974.

Miles’ WW1 collection “Poems and Rhymes” was published by Sidgwick & Jackson, London in 1919, with a memoir from “Cornhill Magazine”, October 1918, written by Edward Hilton Young. 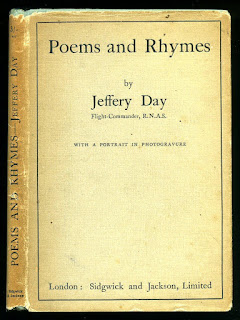 “On The Wings Of The Morning” by Miles Jeffery Day

A sudden roar, a mighty rushing sound,
A jolt or two, a smoothly sliding rise,
A tumbled blur of disappearing ground,
And then all sense of motion slowly dies,
Quiet and calm, the earth slips past below,
As underneath a bridge still waters flow.

My turning wing inclines toward the ground;
The ground itself glides up with graceful swing
And at lane’s far tip twirls slowly round,
Then drops from sight again beneath the wing
To slip away serenely as before,
A cubist-patterned carpet on the floor.

Hills gently sink and valleys gently fill.
The flattened fields grow ludicrously small;
Slowly they pass beneath and slower still
Until they hardly seem to move at all.
Then suddenly they disappear from sight
Hidden by fleeting wisps of faded white.

The wing-tips, faint and dripping, dimly show
Blurred by the wreaths of mist that intervene.
Weird, half-seen shadows flicker to and fro
Across the pallid fog-bank’s blinding screen.
At last the choking mists release their hold,
And all the world is silver, blue and gold.

The air is clear, more clear than sparkling wine;
Compared with this wine is a turgid brew.
The far horizon makes a clean-cut line
Between the silver and depthless blue.
Out of the snow-white level reared on high
Glittering hills surge up to meet the sky.

Outside the wind screen’s shelter gales may race;
But in the seat a cool and gentle breeze
Blows steadily upon my grateful face.
As I sit motionless and at my ease,
Contented just to loiter in the sun
And gaze around me till the day is done.

And so I sit half sleeping, half awake,
Dreaming a happy dream of golden days
Until at last, with a reluctant shake
I rouse myself and with lingering gaze
At all the splendour of the shining plain
Make ready to come down to earth again.

The engine stops; a pleasant silence reigns-
Silence, not broken, but intensified
By the soft, sleepy wire’ insistent strains,
That rise and fall as with a sweeping glide
I slither down the well-oiled sides of space,
Towards a lower, less enchanted place.

The clouds draw nearer, changing as they come.
Now, like a flash, fog grips me by the throat.
Down goes the nose: at once the wire’s low hum
Begins to rise in volume and in note,
Till, as I hurtle from the choking cloud
It swells into a scream, high pitched, and loud.

The scattered hues and shades of green and brown
Fashion themselves into the land I know,
Turning and twisting, as I spiral down
Towards the landing-ground; till, skimming low
I glide with slackening speed across the ground,
And come to rest with lightly grating sound.