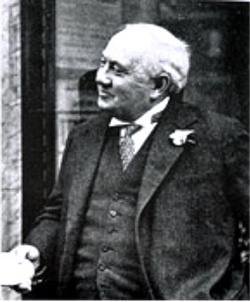 One of my favourite authors - Evely Waugh - was a schoolboy during The First World War. I have been trying to find out whether or not he wrote any poetry at that time. Alec Waugh, a Lieutenant in the Dorset Regiment who was taken prisoner in 1918, certainly did.  His collection 'Resentment: poems' was published by Grant Richard in 1918.*

I am currently reading 'Evelyn Waugh A Biography' by Selina Hastings, published by Minerva Paperbacks, London in 1995.  I was delighted to discover that the Waugh family were related to the Gosse family.  Sir Edmund Gosse is one of the Forgotten Poets of the First World War and his son Philip Gosse MD features in Fascinating Facts of the Great War, as he was for a time the British 2nd Army's Rat Catcher Officer on the Western Front - rats being among the problems encountered there at that time.

Arthur Waugh's cousin Sir Edmund Gosse was apparently a great influence on him and the Waughs regularly attended literary salons held at the Gosse household.  Siegfried Sassoon's family were also great friends of the Gosse family - in one of his letters to his mother from the Western Front, SS mentioned the arrival in his Regiment of a young officer who wrote poetry - Robert Graves.

Arthur Waugh was also a poet and I am now curious as to whether or not he wrote poetry during The First World War.

The photograph of Arthur Waugh is from Ian MacFarlaine's excellent website www.findagrave.com