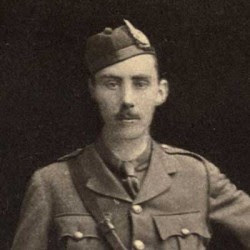 Featured in last year’s Somme Poets Exhibition at the Wilfred Owen Story Museum in Argyle Street, Birkenhead, Wirral, UK, Ewart was killed on 21st November 1917 during the Battle of Cambrai.  He was buried in Orval Wood Cemetery, Flesquières, Nord, France.  The photograph of Kenneth McLennan placing a wreath on the grave of Ewart Alan Mackintosh on the anniversary of the poet's death is by courtesy of Neil McLennan.


Ewart’s poem “In Memoriam” is one of the most emotive of the First World War.  His poetry was compared to that of Rupert Booke at the time of the conflict.


Ewart Alan Mackintosh was born in Brighton, Sussex, UK on 4th March 1893.  His father, from Alness in Ross and Cromarty in Scotland, was Alexander Mackintosh and his mother was Lilian, nee Rogers.  Educated initially at Brighton College, Mackintosh went on to St. Paul's School in London and then studied classics at Oxford in Christ Church College.


At Oxford, Mackintosh was a member of the University's Officer Training Corps and tried to enlist at the outbreak of the First World War.  However, poor eyesight meant that he was initially turned down.  He was commissioned into the Seaforth Highlanders on 31st December 1914 and sent to France.


Mackintosh was wounded at High Wood (Bois des Fourcaux), near Albert on the Somme in northern France, and sent back to Britain in August 1915 to recuperate.  While he was based in Cambridge, he met and became engaged to Sylvia Marsh.


In 1916, Mackintosh was leading his men in battle near Arras when fourteen of his men were wounded and two were killed. The death of one of the men - David Sutherland, who Mackintosh tried in vain to rescue  -  inspired Mackintosh's most famous poem.   He was awarded the Military Cross on 24th June 1916.


Mackintosh was killed in action on 21st November 1917 on the second day of the Battle of Cambrai.  He was buried in Orival Wood near to the northern French town of Flesquieres.  The photograph of his grave shows Neil McLennan leaving a floral tribute on 21st November 2017 - reproduced by kind permission of Neil McLennan


Kenneth McLennan takes up the story: “My grandfather was second man in a Lewis Gun team in Alan Mackintosh's company in 1/4 Seaforths. They were in action near to Cantaing Mill and after some hard fighting were consolidating a counter attack. Mackintosh took the Lewis gun team slightly forward of the firing line where it was set up. He lifted his head to look for targets and was shot through mouth with the bullet exiting at the back of his head. I was told this story many times and never paid much attention to it until many years later when I went looking for who this officer was and where he was buried.”


"A Highland Regiment and Other Poems" published by John Lane, London in 1917 and


"War The Liberator and Other Pieces", published in 1918 by John Lane, London, and his poems were included in 8 WW1 poetry anthologies. (Source:  Catherine W. Reilly "English Poetry of the First World War: A Bibliography" (St. Martin's Press, New York, 1978).


Additional information supplied by Kenny McLennan, whose grandfather served in the same Regiment as E.W. Mackintosh.


So you were David's father,
And he was your only son,
And the new-cut peats are rotting
And the work is left undone,
Because of an old man weeping,
Just an old man in pain,
For David, his son David,
That will not come again.


Oh, the letters he wrote you,
And I can see them still,
Not a word of the fighting
But just the sheep on the hill
And how you should get the crops in
Ere the year got stormier,
And the Bosches have got his body,
And I was his officer.


You were only David's father,
But I had fifty sons
When we went up that evening
Under the arch of the guns,
And we came back at twilight
— O God! I heard them call
To me for help and pity
That could not help at all.


Oh, never will I forget you,
My men that trusted me,
More my sons than your fathers'
For they could only see
The little helpless babies
And the young men in their pride.
They could not see you dying
And hold you while you died.


Happy and young and gallant,
They saw their first born go,
But not the strong limbs broken
And the beautiful men brought low,
The piteous writhing bodies,
They screamed, "Don't leave me Sir,"
For they were only fathers
But I was your officer.
Posted by Lucy at 12:26