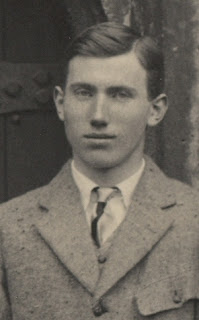 Patrick Houston Shaw-Stewart was born in Dolgelly, Merionethshire in Wales on 17th August 1888.  His parents were Major General John Heron Maxwell Shaw-Stewart, a retired, high-ranking British Army officer, and his wife Mary Catherine, nee Bedingfield.  He had a brother and two sisters.


Patrick was educated at Eton College before winning a Classical Scholarship to study at Balliol College, Oxford where one of his contemporaries was Julian Grenfell.


In London to work at Barings Bank, Patrick joined the Coterie poetry group.  The Coterie was a select group of Edwardian artists and intellectuals with members such as Diana Manners (Lady Diana Cooper) and Raymond Asquith.


In America for business reasons in August 1914, Patrick returned to Britain and volunteered to join Winston Churchill’s recently created Royal Naval Division.  He was sent to Dunkirk, initially as an interpreter, then as Embarkation Officer.  He was then sent to “Hood Battalion”, where Rupert Brooke was a fellow officer.  When Rupert Brooke died and was buried on the Island of Skyros en route for Gallipoli, Patrick was in charge of the firing party at Rupert's funeral.


After service in the Gallipoli Campaign, Patrick was promoted to the rank of Lieutenant-Commander and posted to the Western Front in France in command of the Hood Battalion. He was killed in an area to the north of Cambrai on 30th December 1917. He was buried at Metz-en-Couture in the British Extension to the Communal Cemetery.  There is a memorial to the memory of Patrick Shaw-Stewart at Balliiol College Oxford, on the west wall of the Chapel passage.


Patrick was awarded the Chevalier of the Legion of Honour – Croix de Guerre (France) for his services as a Liaison Officer with the French Headquarters.  His most famous poem is “Achilles in the Trench”, which was included in three WW1 anthologies.

From "Achilles in the Trench"

Fair broke the day this morning
Upon the Dardanelles:
The breeze blew soft, the morn's cheeks
Were cold as cold sea-shells.