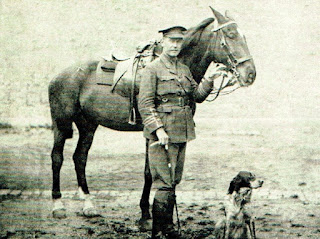 Although, strictly speaking John McCrae is not forgotten, most people know his very famous poem "In Flanders Fields" which was written following the death of one of his friends and first published anonymously in "Punch" magazine on 8th December 1915, few people know much about the man.

Sunday, 28th January 2018 marks the Centenary of the death of Canadian poet, writer, artist, doctor and artilleryman John McCrae, who served in the Canadian Army during WW1 on the Western Front from 1914 until his death.  McCrae’s poem “In Flanders Fields”, written following the death of his friend and fellow artilleryman Alex Holmer, in May 1915,  inspired American poet Moina Belle Michael to write a poem and make a vow always to wear a red poppy in Remembrance.

McCrae was born in Guelph, Ontario, Canada on 30th November 1872.  He was a keen sportsman and broke his nose playing Rugby while at university studying medicine.  McCrae was a talented artist, writer and poet and he served in the Canadian Artillery during the Boer War in South Africa.  In 1914, McCrae was second in command of the 1st Brigade Canadian Field Artillery who were among the first Canadian troops to reach the Western Front.  In 1915 McCrae was promoted to the rank of  Lieutenant-Colonel and put in charge of No. 3 General Hospital in Dannes-Carniers.  This was a tented hospital.

John McCrae died of Pneumonia on 28th January 1918 at the Canadian (McGill) Hospital in Boulogne.  He was buried in Wimereux Cemetery in France.


In Flanders fields the poppies blow
Between the crosses, row on row,
That mark our place, and in the sky,
The larks, still bravely singing, fly,
Scarce heard amid the guns below.


We are the dead; short days ago
We lived, felt dawn, saw sunset glow,
Loved and were loved, and now we lie
In Flanders fields.


Take up our quarrel with the foe!
To you from failing hands we throw
The torch; be yours to hold it high!
If ye break faith with us who die
We shall not sleep, though poppies grow
In Flanders fields.
John McCrae's WW1 poetry collection "In Flanders Fields and Other Poems" was published in 1918.


The photograph shows John McCrae with his horse Bonfire and dog Bonneau, who were with him on the Western Front.
Posted by Lucy at 04:14