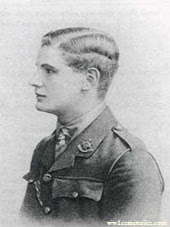 Francis, known to his family as ‘Vin’, was born on 21st February 1896 in Ashbourne, Derbyshire, UK.  His parents were Ernest Edwin Morris, an Anglican Church Minister who was Vicar of St. Oswald’s Parish Church, Ashbourne, and his wife, Josephine Anna Morris, nee Bolton.  Francis had the following siblings:  Mary E. b. 1888, Ruth L. b. 1892 and Ernest B., b. 1894.  The family lived in The Vicarage in Ashbourne.

Educated at home by a governess, then at Brighton College and Wadham College, Oxford, Francis was commissioned as a Second Lieutenant into the Sherwood Foresters (Nottinghamshire and Derbyshire) Regiment on 7th August 1915.

Francis applied to join the Royal Flying Corps and, after completing a training course in Oxford, transferred to the 3rd Squadron of the Royal Flying Corps in early 1917.  He was posted to France, where he had two flying accidents due to the very bad weather.  Then his plane crashed near Vimy Ridge during a snow storm.  Francis was badly wounded and had to have a leg amputated.  He was transferred to the Base Hospital in Rouen in preparation for a further operation but died on 29th April 1917.  Francis was buried in St. Sever Communal Cemetery in Rouen.

Francis’s WW1 poetry collection “Poems” was published by Blackwell, Oxford in 1917 and his poems were included in the following WW1 anthologies:  “Oxford Poetry, 1917” Edited by W.R. Childe, T.W. Earp and Dorothy L. Sayers, Blackwell, Oxford, 1917 and “The Valiant Muse: an Anthology of Poems by Poets killed in the War”, 1936, Edited by Frederic W. Ziv.

Through vast
Realms of air we passed
On wings all-whitely fair.

Sublime
On speeding wing we climb
Like an unfettered Thing,

Away
Height upon height; and play
In God's great Lawns of Light.

And He
Guides us safe home to see
The Fields He bade us roam.